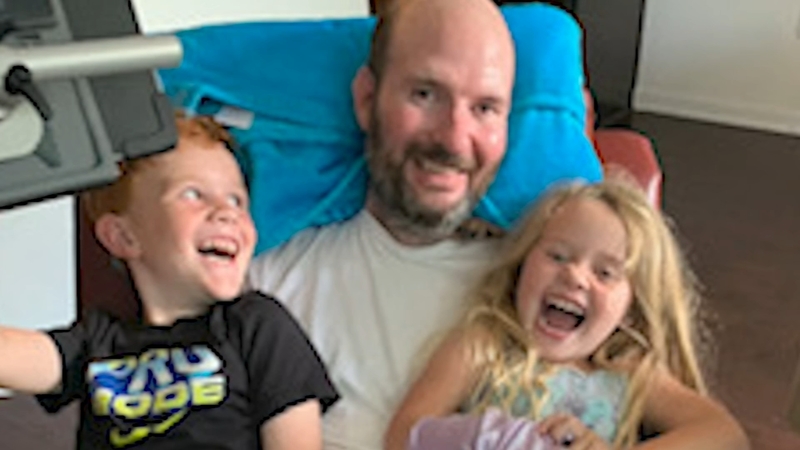 RALEIGH, N.C. (WTVD) -- Six years ago, Michael Bereman was diagnosed with amyotrophic lateral sclerosis, commonly known as ALS. He and his wife, Meagan, were fairly new parents to their 1-year-old son, Mason.

Meagan told ABC11 she remembered her husband researching the crippling disease before the diagnosis was considered.

"I said this is crazy, like no way," she recalled.

The two met on the campus of North Carolina State University as undergrads. After finishing their degrees, the two lived in Seattle, Washington, for four years before relocating to Apex.

“His purpose was to end this disease.” This is Meagan Bereman. She lost her husband, Michael, to ALS in March. On June 26, family and friends will join “Bereman Brave” in the Walk to Defeat ALS. Michael was an NC State professor and studied biomarker research. #ABC11 pic.twitter.com/FKWEVHfQ9Y

Bereman, who also was a professor and biomarker researcher at NCSU, gave ALS everything he had, inside and outside the home, prior to his death.

The couple's 4-year-old daughter has been having difficulty processing as she first met the dad she knew after he was diagnosed.

"She didn't even realize daddy was sick. That was just her normal," Meagan Bereman said. "So, she has been the one who is struggling the most. That void in her life is real. It's painful."

Meagan Bereman said Michael worked up to the days before he died.

"All of us were so shocked he had passed because he was e-mailing them days before he passed," she said. "ALS takes everything away from you. It takes away your speech, your movement, and eventually your breathing. But your mind stays completely intact. That's why I think it's a monster of a disease."

On June 26, thousands will participate in the Walk to Defeat ALS across the Triangle, including Bereman Brave.

Meagan Bereman came up with the name she thought would best capture her husband's character. The event, which won't take place in its usual fashion because of the pandemic, will be done at parks and neighborhoods across the Triangle. Bereman Brave will be walking on NC State's Centennial Campus near where Dr. Bereman worked.

"We were lucky to have such a slow progression in the beginning and have him work for so long," Meagan Bereman said. "It gave us all such purpose and such hope and determination that if there's a will, there's a way."

The walk also comes a week before what would have been his 40th birthday.

And there's one quote by former NC State basketball coach Jim Valvano, who lost his life to cancer, that keeps the family going strong.