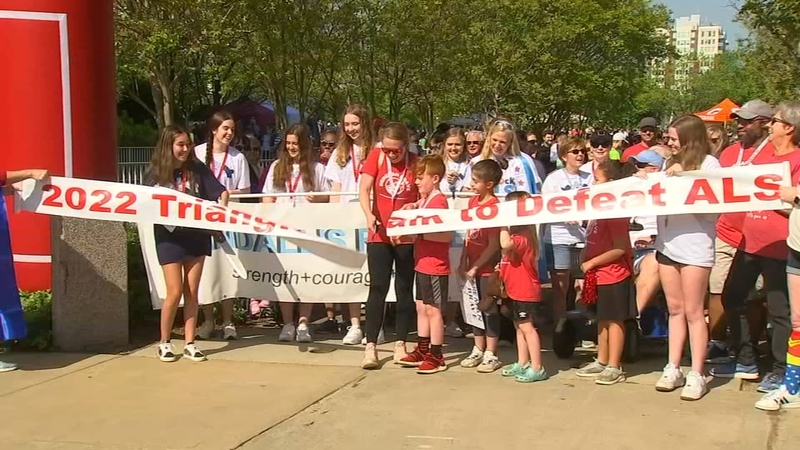 The Walk to Defeat ALS returns to Raleigh

RALEIGH, N.C. (WTVD) -- We had near perfect weather Saturday for the 2022 Walk to Defeat ALS. A huge crowd of teams and individuals gathered at the Halifax Mall in Raleigh under sunny, brilliant blue skies and very low humidity.

"It's great to see that people care enough to spend their time, to come out and help support the cause," said walker Penny Peacock.

The cause is very close to our hearts, after the loss of our friend and longtime ABC11 anchor Larry Stogner to ALS.

"The ravages of ALS don't end when the patient dies. It's been 5 and a half years since Larry died, and I miss him every day," said Bobbi Stogner. "I thought that we would have a lot more time together. So, it's a disease that we need to keep fighting, keep working towards the research for a cure."

Those who walked, including ABC11's Stogner Strong team, raised money that pays for that research as well as assistance for families affected by ALS. Saturday's response was gratifying after a two-year pandemic pause. At least 1,200 people registered to walk, and some brought pets along for company along the two-mile route through downtown Raleigh.

The response made Bobbi Stogner smile as Bobbi remembers Larry's participation walking and later, from wheelchair as his health declined.

"Larry was amazed, honored, he was very impressed that people cared so much, and wanted to put this much time and energy into raising support for the disease but also in his honor, and now in his memory," she said.

The goal for this year's Walk to Defeat ALS is $420,000 with more than half that amount raised so far. You can still donate online until September 20 at https://abc11.com/together. We, and everyone affected by ALS, thank you for your support.
Report a correction or typo
Related topics:
community & eventsraleighalsabc11 together
Copyright © 2022 WTVD-TV. All Rights Reserved.
TOP STORIES
Body found on the bank of the Tar River in Edgecombe County
A motorcycle's unforgettable ride back home
Raleigh breaks heat record set in 1938
Trees downed, power outages reported after powerful overnight storm
Trump pays $110K fine, but must submit paperwork to end contempt
Driver struggles to get permanent tags for truck bought on Vroom
Former Duke assistant football coach dies at 59
Show More
American Airlines flight veers off runway in Charlotte
Our America: Because I Am | Full episode
Officials remain optimistic as tourism in Wake County booms
NC State's Tommy White breaks ACC freshman home run record
Violent crime in Durham up 8% during first few months of 2022
More TOP STORIES News