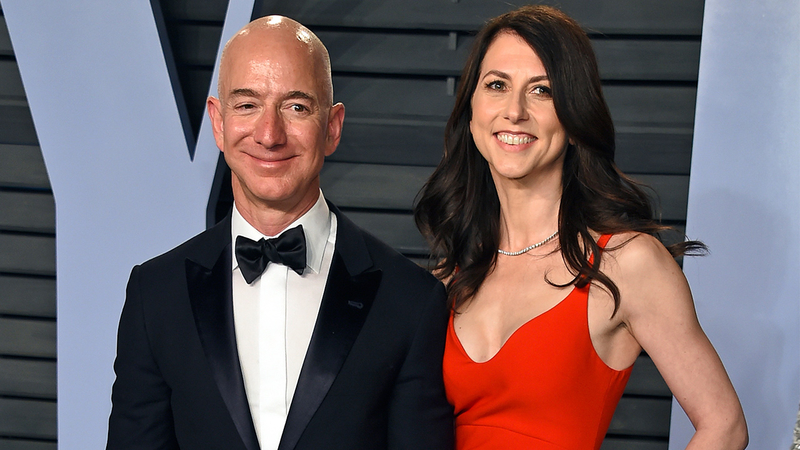 NEW YORK -- Amazon said Thursday that founder and CEO Jeff Bezos has finalized his divorce with wife MacKenzie, who will end up with a stake in the online shopping giant worth more than $35 billion.

In a tweet, MacKenzie Bezos said she is giving Jeff Bezos all her interest in The Washington Post, the newspaper that he bought in 2013, and Blue Origin, the space exploration company he founded.

"I'm grateful for her support and for her kindness in this process," Jeff Bezos said in a tweet Thursday. "And am very much looking forward to our new relationship as friends and co-parents."

The Bezoses, who have four children, first announced they were divorcing in January, just before the National Enquirer published a story that said Jeff Bezos was having an affair with a former TV host. He later accused the tabloid's publisher of threatening to publish explicit photos of him unless he stopped investigating how the Enquirer obtained private messages between himself and his lover.

He'll be Amazon's largest shareholder, and he'll also keep voting control of MacKenzie Bezos's shares, according to a filling with the Securities and Exchange Commission.

The divorce ends a 25-year marriage that played a role in creating one of the world's most valuable companies.

The Bezoses met in New York in the early 1990s while working at a hedge fund. They married just six months after they began dating, Jeff Bezos has said.

Not long after that, he quit his job to start an online bookstore and the Bezoses took a cross-country road trip to Seattle, which was chosen for its high number of technology workers. While his wife did the driving, Jeff Bezos wrote a business plan. By 1995, Amazon was operating out of a garage, with MacKenzie Bezos helping out.

Amazon has grown way beyond those humble beginnings. It now produces movies, runs the Whole Foods grocery chain and has become the leader in voice-activated speakers. The company has become so large that it plans to build a second headquarters in Arlington, Virginia.

MacKenzie Bezos, a novelist, said in a tweet Thursday that she was "excited" about her future plans, but didn't say what they were.

"Grateful for the past as I look forward to what comes next," she said in the tweet.

The two posted details of their divorce deal Thursday in a series of tweets.