Seattle resident on Amazon HQ2: 'Be careful what you wish for' 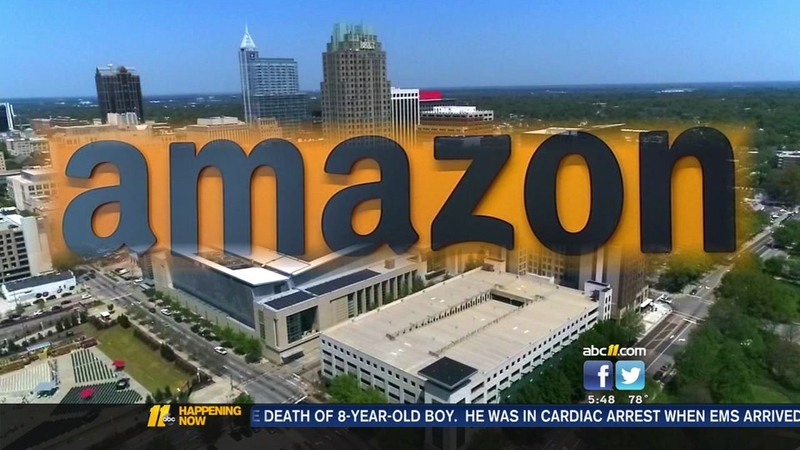 SEATTLE (WTVD) -- It's irrefutable that Amazon's presence has injected life -- and cash -- into downtown Seattle, but that doesn't automatically make the tech giant a good neighbor.

In an ABC11 exclusive, the I-Team spent several days in Seattle touring Amazon's current headquarters and its surrounding areas, offering a comprehensive look at the company's footprint and a better understanding of what to expect should Amazon choose Raleigh for its new headquarters.

According to Amazon, the new campus -- dubbed "HQ2" -- will be a full equal to its current one in Seattle, which is home to some 45,000 employees working in 8.1 million square feet of office space. After reviewing hundreds of submissions from cities large and small, Amazon announced earlier this year its short list of 20 finalists, which included Raleigh. If the Triangle is chosen, both business and political leaders agree it could have a far-reaching impact on everyone in the community. 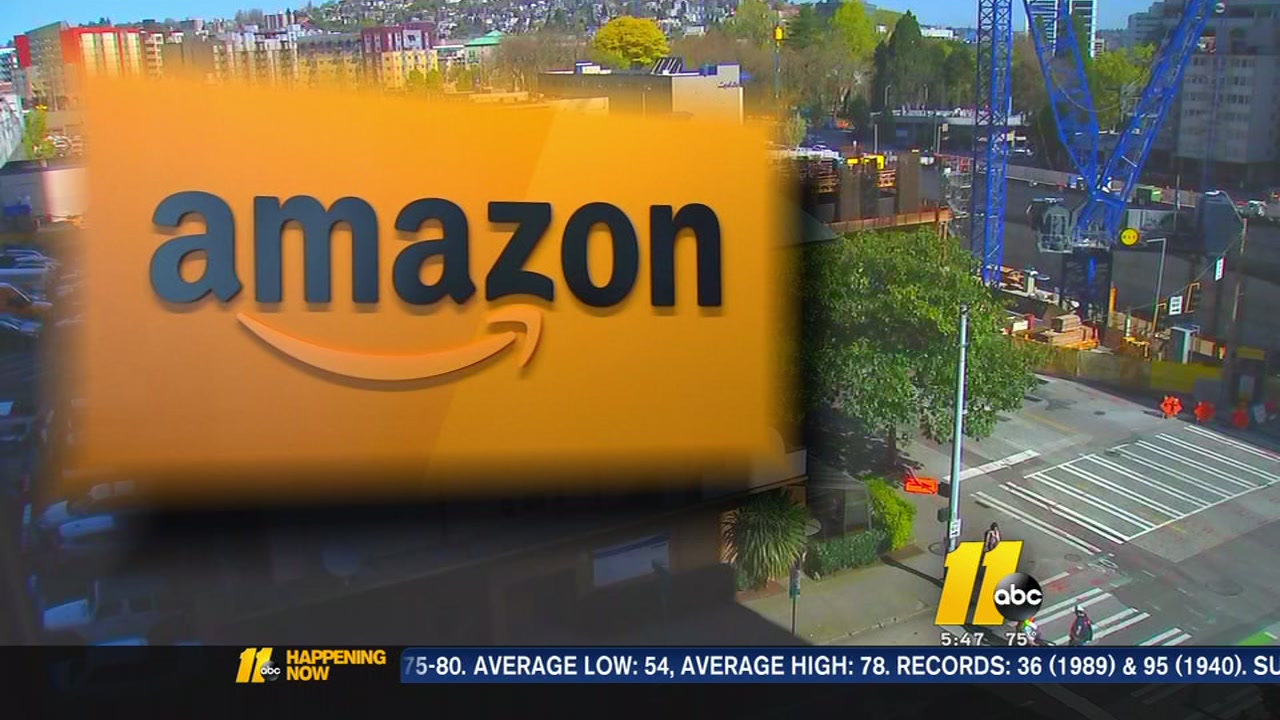 How could an Amazon headquarters impact the community?
Tonight at 5:30, if Amazon's HQ2 comes to North Carolina, would it make a good neighbor?

The Pacific Northwest has long been home to several storied companies like Boeing and Microsoft, but few have had the direct impact on Downtown Seattle.

Amazon, founded in Seattle by Jeff Bezos in 1996, grew from a small bookshop to the behemoth it is today in just two decades. The famed Space Needle is now joined by several shiny, multi-colored towers, and dozens of cranes reaching into the sky as the Amazon neighborhood continues to grow.

RELATED:
$5 billion. 8 million square feet. Here's what Amazon HQ2 would look like in the Triangle
'The jobs came faster than the housing': In Seattle, Amazon's rise also delivers growing pains

"It's a tremendous energy, I think, because of all of the opportunity that's here, and people know that coming in," Eric Olinsky, a chef who recently moved to Seattle, tells ABC11. "There's definitely a youth and vibrancy here."

The result has been an additional 53,000 jobs and $38 billion in the local economy.

"When I'm walking through different neighborhoods you're seeing people who come here who are not looking to sit at home and watch something streaming," Olinsky explains. "People like to go out. You go the parks, you explore the area, you check out different businesses, restaurants that are opening up, little cafes that are doing interesting things. There's a culture here of going out and experiencing what we have because we have all this cool stuff."

IS SEATTLE TOO POPULAR?

Wake County likes to boast that 67 people move to the Triangle every day because of the opportunities present in the area, but U.S. Census data suggest Seattle and King County are seeing the fastest and most pronounced growth in the country, with up to 1,000 people a week.

Alison McLean, a Seattle native and mom who works in child care, says her hometown has become almost unrecognizable.

"It's not the people of Seattle that I know who work at Amazon, who grew up in Seattle who work at Amazon who have these high paying jobs," McLean lamented to ABC11. "These are people that they import and they bring from other states or other countries and they have all the high paying jobs and they drive up the rents. The people who grew up in Seattle are really left behind in a lot of ways. I would say be careful what you wish for."

Employment records were not available at Amazon to verify or refute McLean's claims, but there's no denying the surging home prices and traffic in Seattle and the surrounding area. McLean, who lives in the north Seattle neighborhood Magnolia, says she'd be moving away if not for her parents' help.

"My parents bought a house in 1984 for $90,000, and it's worth $900,000 now," McLean quips. "Teachers can't afford to live in the neighborhood they teach in and anyone that's sort of middle income can't afford to be living near their work. They all have to live half-an-hour or an hour away, and that's what makes the traffic even worse, yes."

Kerry McManus, another Magnolia resident, tells the I-Team she and her neighbors have been getting offers from developers who want to build condominiums.

"It's cool because you get money out of it, but all these families they're going to have to find somewhere else to move and it's a huge inconvenience," she says. "I still live here because Seattle is a great city, but unfortunately the amount of change and the rate we've seen it happen in has made everything explode so that it's unrecognizable now."

A region's growth extends into the classroom as well, as new families and new residents enroll their children into the local school districts.

Unlike county-wide districts North Carolina, school districts in the State of Washington are much more concentrated on the local level. Seattle Public Schools, the largest district in Washington, reports a current enrollment of 53,380 students (there are more than 160,000 enrolled in WCPSS). In the last 10 years, administrators report a net gain of more than 8,000 students to enrollment, or a 18 percent spike (in Wake County, that would amount to an additional 28,800 students).

"We can't build our way out of this," Leslie Harris, SPS School Board Director, asserts to ABC11. "We've got some schools with as many as 20 portables. In the last three years, we have opened 10 new schools or rebuilds. Additionally, in Seattle, SPS has difficulty hiring teachers because they can no longer afford to live in the city."

While Harris says Amazon's presence in Seattle has helped broaden the district's curriculum -- 21 percent of students have a non-English speaking background -- she laments Amazon has not played a prominent role in sponsoring any pilot programs or scholarship opportunities.

"When you make your deal with Amazon, make it with support," Harris says, in a message directed to Raleigh and North Carolina leaders. "That means make sure your Amazon employees are mentoring your students, make sure they are partnering with you on grants or pilot programs. Make sure you're partners in the process."
Report a correction or typo
Related topics:
technologyseattleiteamamazoni team
Copyright © 2021 WTVD-TV. All Rights Reserved.
AMAZON
NC man accused of defrauding Amazon out of $290,000 through returns
'My Name is Pauli Murray': A Durham-made icon gets her due on film
Bezos, Branson stripped of newfound 'astronaut' titles
Amazon hires investigators to probe work culture
TOP STORIES
'It's crazy': Wolfpack fans ecstatic after upset of No. 9 Clemson
3 people dead after Amtrak train derails in Montana
UNC brutalized by Georgia Tech defense, running game in 45-22 loss
Local Haitians react to treatment of migrants flown back to the island
Vigil marks third anniversary of Durham man's murder
'The curse is broken': Pack beats No. 9 Clemson in OT thriller 27-21
Show More
Man seriously injured in shooting near Duke University Hospital
Bikers in Durham stand up against child abuse
Holmberg accounts for five TDs as Duke roars past Kansas, 52-33
North Carolina Central falls to rival NC A&T 37-14
Report uncovers how 6-year-old died on amusement park ride
More TOP STORIES News