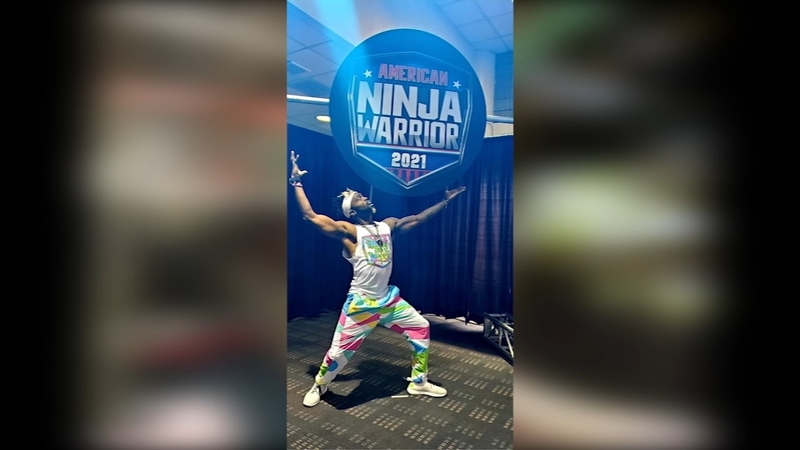 FUQUAY-VARINA, N.C. (WTVD) -- Without his knowing, Devin Harrelson's wife signed him up to try out for the show America Ninja Warriors. Seven years later, the Fuquay-Varina native is still charging through obstacles and showing a big personality along the way.

Not many learning curves are steeper than this one. Thrust into a world he didn't even know existed, Harrelson is now at the top of this game.

"When I got bit by this ninja bug, man it didn't stop. I ripped my hands a lot, I did this but I just taped them up and kept on going," Harrelson said.

You might know him as Dougie on @anwnation Devin Harrelson had his ninja gym in Garner vandalized, but keeps his head up and charging forward. His story is coming up on @ABC11_WTVD pic.twitter.com/HvAbuUfQh7

And going. Harrelson has turned himself into a professional Ninja Warrior.

"This was meant for me," he said. "I feel like this was a path -- Ninja was calling me and I haven't stopped since."

His colorful style includes light-up shoes and a signature pose. Attacking the course while donning a chain helped earn him the nickname Dougie Fresh after the iconic 80s rapper.

"When people see fun colors and fun bright fun colors, they want to smile. I want people to smile," Harrelson said. "I want people to be around me to have a good time. And so I feel like the way that I dress, my personality and all that, I can show that through my clothing and deliver that. Look, it's all love. Come on over here and get some of this colorful love."

Love hasn't always come back. Harrelson opened his own ninja gym and tattoo parlor in Garner four years ago called Ninja Techniques. Returning from a competition in March 2019, he found it vandalized. All of his hard work destroyed. Dejected, Harrelson decided to close the doors for good. A wound that has not healed.

"I just thought it would be a lot to start back over," Harrelson said. "Especially the way ... I cut ties and say goodbye to Ninja Techniques and try to see where the next journey was going to take me."

Onward, over and upward. That's where Harrelson has gone. Succeeding with style despite being set up to fail at every turn. Don't be fooled by the smile, however -- Harrelson is in it to win it.

"To me to be the last person standing would be my Ninja badge of approval," he said.