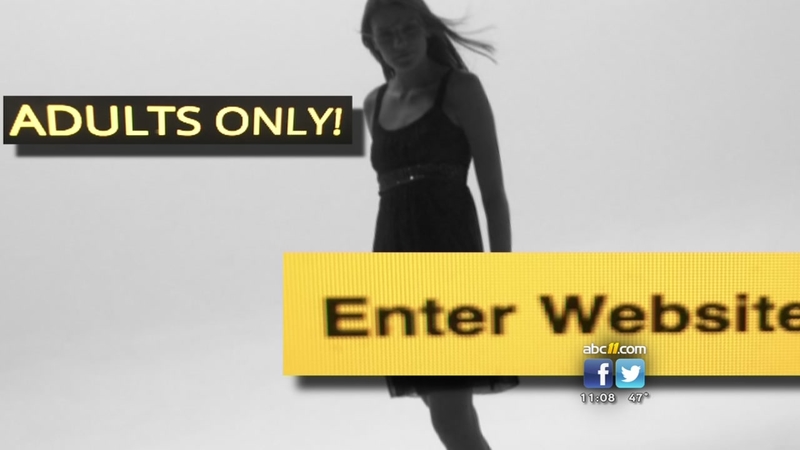 "The party line was that we were just the publisher and we didn't own the content," one former employee told ABC11, speaking on condition of anonymity. "But everyone there knew we were selling sex."

The I-Team has been speaking daily with former employees, industry insiders and federal officials since a team of agents from Homeland Security Investigations raided Bolma Star Services at 51 Flex Way in Youngsville on November 7.

At the time, investigators told ABC11 they were investigating "illicit activity," but several sources connected the dots between Bolma, Eros Guide, and other shell companies including BBH Media, Marketing Adventure Media, and Darkside Productions.

Greg Huling, the man listed as CEO of Bolma Star Services on state records, abruptly hung up when the I-Team reached him by phone.

The former employees contacted by ABC11 said they worked with Huling on the Eros Guide, some as early as 2004. They describe an intense, strict but lucrative business that reached all major American cities and the United Kingdom.

"There was the (customer-service relations) team that manned the phones and emails waiting for clients (escorts) to contact us for an ad," one former employee wrote in an email to ABC11. "They would receive the information, text, pictures and payment information. They would check IDs to make sure no one was underage as well. They would also scrub said text for any illegal verbiage like stating sex for money or other services. We had a list just like this of things they could not advertise."

Another employee said there was a glossary of flagged terms two-inches thick.

"There was one client that paid $10,000 a month," another former employee said. "And there were thousands more like them. Sometimes we changed the text for them, even though we technically weren't supposed to."

While not confirming the exact nature of this investigation, federal officials said Homeland Security Investigations (HSI) is often assigned to cases involving money laundering, trafficking, and cyber-sex crimes (prostitution and solicitation are generally state crimes instead of federal).

"It was one thing to talk with an individual, but it was totally different when you were basically talking to a pimp," a former employee told ABC11. "I felt like I was perpetrating the sale of human flesh."

No charges have been filed and no one has been arrested. The U.S. Attorney's Office said the case against Bolma Star Services remains sealed in federal court and is still under "active investigation."

ABC11 has decided to slowly reduce the number of stories on the website that have a comments section. We believe very strongly that our audience should have an opportunity to discuss and debate events in our world, however, we have not been able to moderate the comments as well as we would like. Instead of hosting a platform that could allow a few loud and ugly voices to dominate a conversation, we want to encourage everyone to join us on our social media platforms and speak out there. Facebook: facebook.com/ABC11 Twitter: twitter.com/ABC11_WTVD
Report a correction or typo
Related topics:
youngsvillefranklin countysexdepartment of homeland securityfranklin county newsi teamraid
Copyright © 2022 WTVD-TV. All Rights Reserved.
I-TEAM
Shortage of mental health professionals persists as need grows
Durham County Sheriff reveals cross-county 'Strike Team'
Doctors notice increase in long-haul COVID-19 cases
COVID-19 metrics increase in NC; what you need to know
TOP STORIES
Wake County Sheriff Baker going into runoff election
NC Primary Election: Live updating results
Madison Cawthorn concedes primary to Chuck Edwards
Budd, Beasley win to set up Senate showdown in November
Fayetteville woman found murdered was pregnant, family members say
Will property taxes rise? Raleigh council discusses $1.14B budget
Wounded U.S. veteran receives mortgage-free home
Show More
NY teen found dead in SC after 13 years; Sex offender charged
Voting goes 'smoothly' across NC on primary election day
Durham voters turnout on Primary Election day
Former UNC player Ademola Okulaja dies at 46
Congress dives into UFOs, but no signs of extraterrestrials
More TOP STORIES News