Armstrong: Mountaineers are King of the Hill 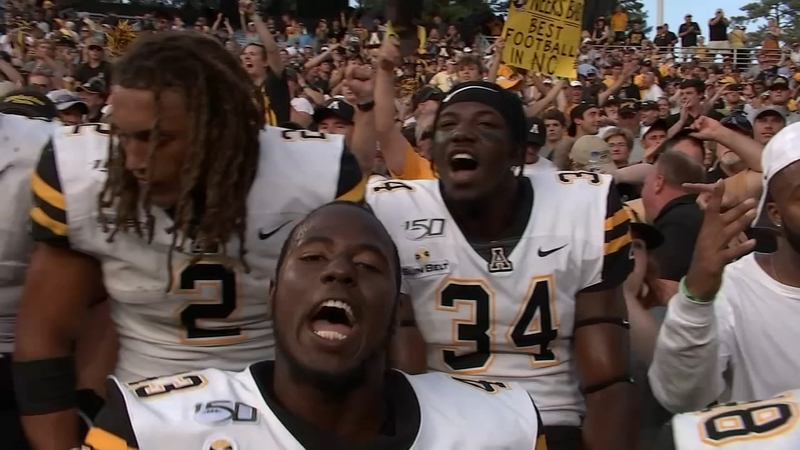 Mountaineers are King of the Hill

CHAPEL HILL, N.C. (WTVD) -- It's not a UNC game this year without some late-game drama, but for the second straight week, it was the opposition that wound up celebrating a win. Against a high-quality team like ASU, you simply cannot go down 17 points and expect to win.

I heard the roar from inside the App State athletic director's box. They were reacting to Zac Thomas' 50-yard gallop in the first quarter at the time, but that was just the beginning of a big afternoon for the folks from Boone.

After what had been a dream start for Carolina to go up 7-0, the Mountaineers then clinically took the Tar Heels apart, scoring 27 of the next 30 points. There was no gimmickry, no luck, just a better team flexing its muscles.

It was a match up nearly 80 years in the making and the Apps weren't about to let the opportunity to beat up on the state's biggest brand name pass them by.

ASU defensive end, in particular, Demetrius Taylor came down from the mountains on a mission. The junior from Miami terrorized the Tar Heels all afternoon, amassing 3 sacks, an interception and an early tone-setting clobbering of Sam Howell that forced a fumble that Taylor also recovered and ran in for a TD.

To Carolina's credit - they clawed their way back into the game in the third, Sam Howell orchestrating a sprawling 98-yard drive that finished with a TD toss to Carl Tucker. Down just 3 points at 27-24, Kenan was alive.

The Mountaineers weren't having it though. They immediately answered with a lightning touchdown drive of their own and then hijacked a Howell pass on the next possession to take back total control. App State has long wanted to be in the conversation as the state's premier team. Saturday they showed they have a convincing argument.
Report a correction or typo
Related topics:
sportschapel hilluncfootball
Copyright © 2022 WTVD-TV. All Rights Reserved.
TOP STORIES
Heavy rain, winds knock down trees, power in parts of central NC
Durham police investigate fatal shooting, crash along NC 55
Congresswoman announces $3M for strollway between Chavis, Dix parks
Johnny Depp, Amber Heard trial: Kate Moss expected to testify
NFL QB Dwayne Haskins legally drunk when he was hit, autopsy shows
Duke pediatrician warns about baby formula shortage impact
Homeless veterans get an assist from Durham's Rotary Club
Show More
Truck slams into NC woman's new home
Supreme Court ruling results in 'tragic loss' for death row inmates
Shelf cloud seen in Raleigh ahead of line of storms
New NC flood monitoring system ready for next big storm
Father puts 1,000 miles on his car to find specialty formula
More TOP STORIES News