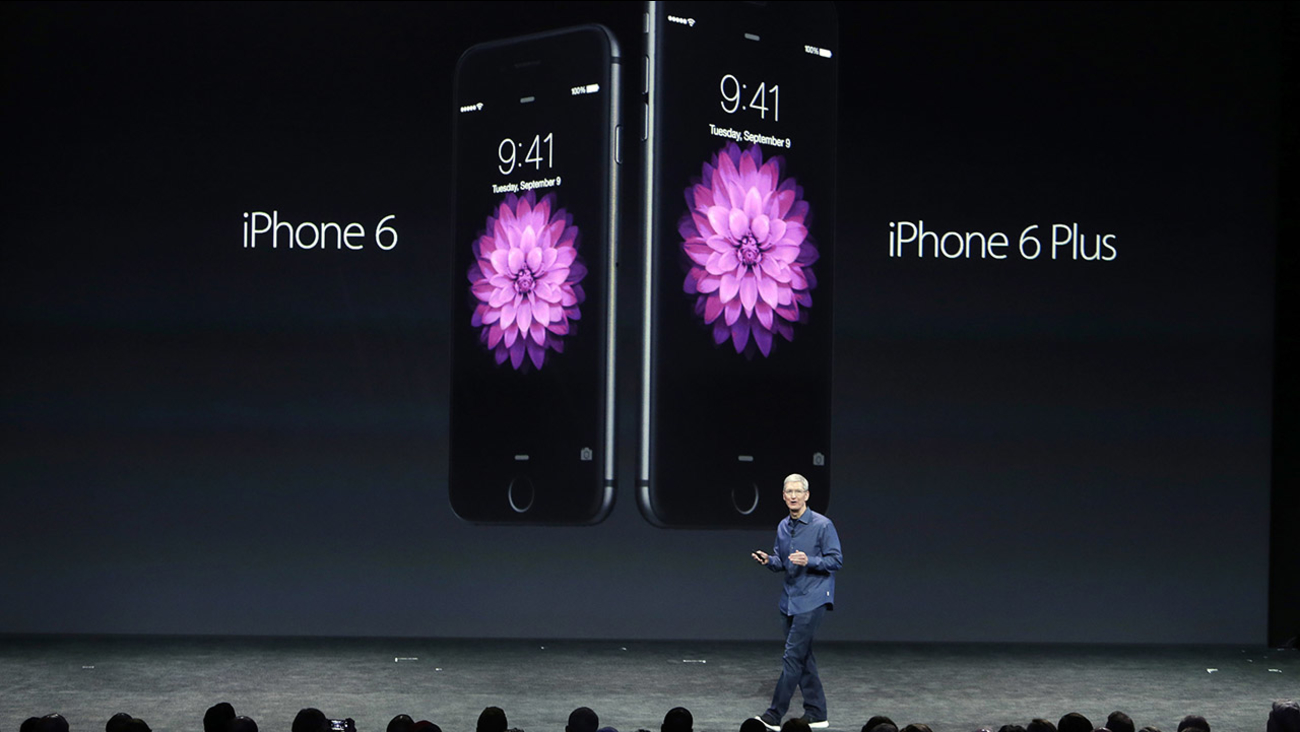 **THIS LIVE EVENT HAS CONCLUDED**

Tuesday, Apple announced two new iPhones -- the iPhone 6 and the iPhone 6 Plus -- as well as a new payment system called Apple Pay and the much anticipated Apple Watch. Below was live coverage of the keynote event.

Note: All times are listed as Pacific

11:54 a.m.
U2 announces new album "Songs of Innocence" and that it's going up for free on iTunes, making it the largest album release in history. 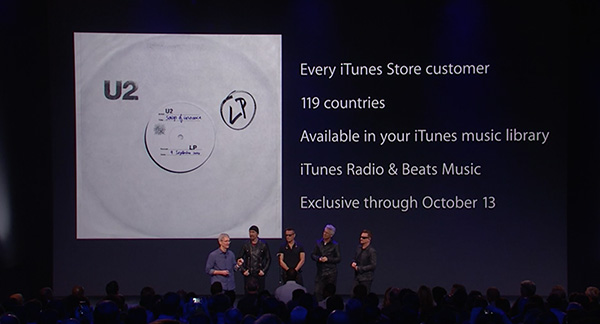 U2 announces the release of their new album free on iTunes.

U2 performs live in Cupertino at an Apple event. 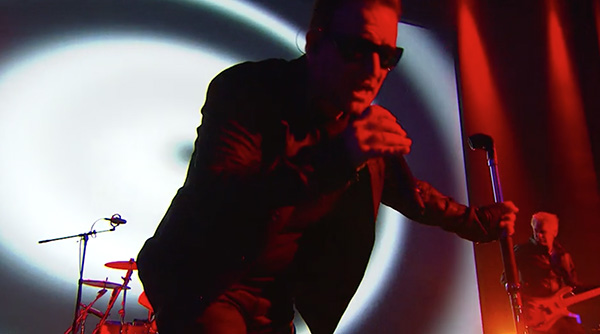 
11:45 a.m.
Tim Cook recalls long-established relationship between Apple and U2...and says they will be performing.

Tim Cook says it's a product "worth waiting for." 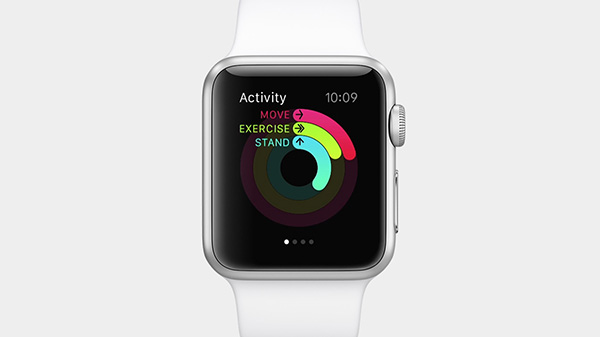 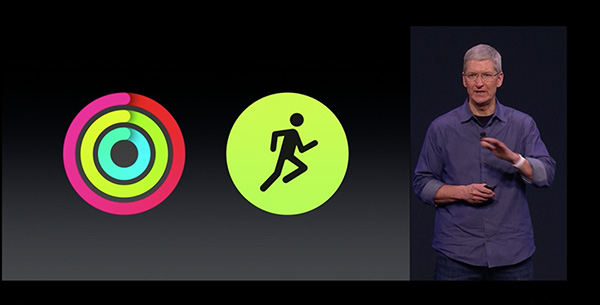 11:25 a.m.
Maps on Apple Watch will use taptic engine to let you know when to turn as you walk. 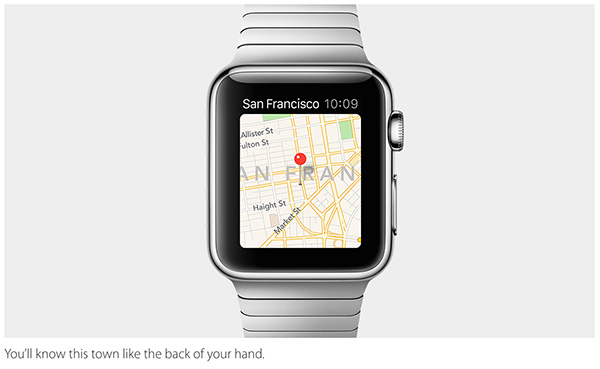 Favorited photos from iPhone will show up on Apple Watch.

Home screen has clock at center surrounded by apps. 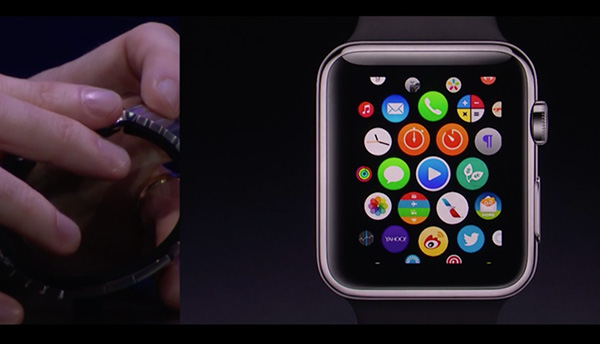 There will also be a smaller watch with smaller face and bands.

11:05 a.m.
Tim Cook says Apple Watch is as "much about personal technology as it is about style and taste." 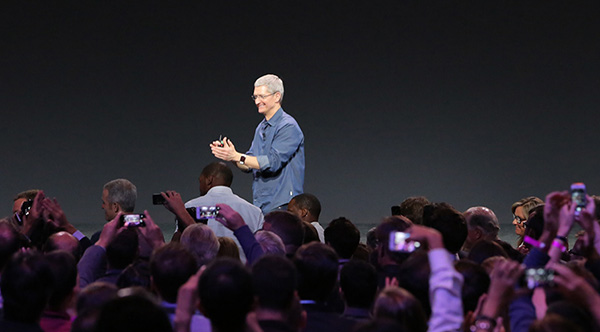 
11:03 a.m.
Tim Cook: Cook: "What we didn't do is take the iPhone and shrink down the user interface and strap it on your wrist."

Watch crown (that little knob on the side of your analog watch) is now the digital crown and will act as a navigation device. 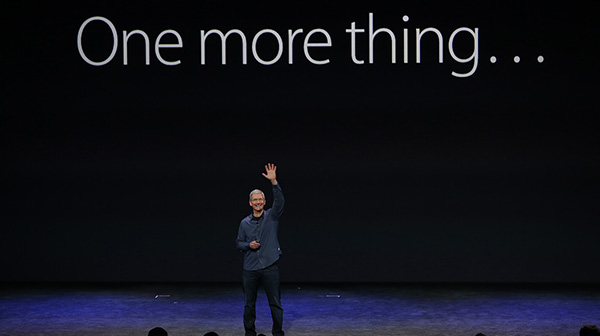 10:51 a.m.
Privacy and security key to ApplePay. Apple doesn't know what you bought, where you bought it or what you paid.

Apple: When you add a card to Passbook, its number is never stored or shared on your device or Apple servers. Each transaction is authorized with a one-time unique number.

Will start with American Express, MasterCard and Visa.

Will work at 220,000 merchant locations that currently accept contactless payments.

ApplePay is built into every iPhone 6 and 6 Plus. 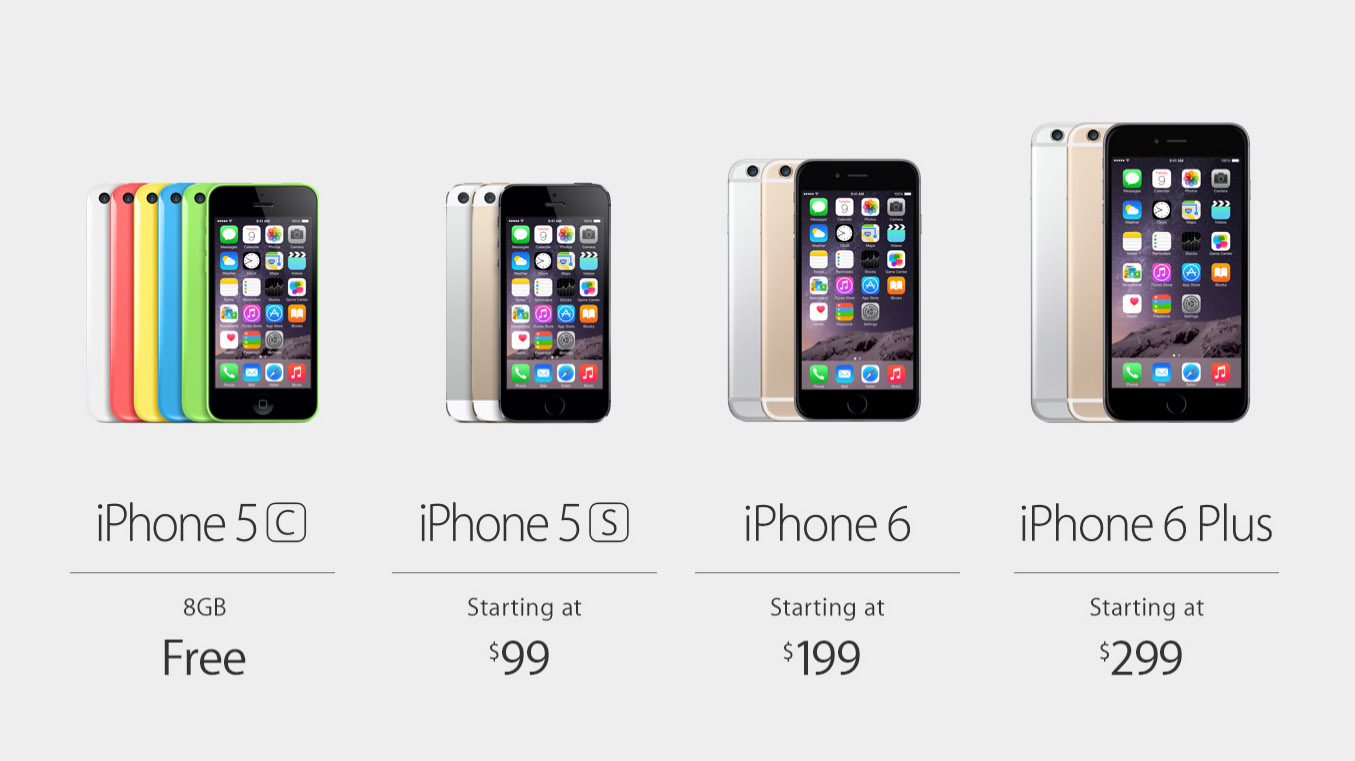 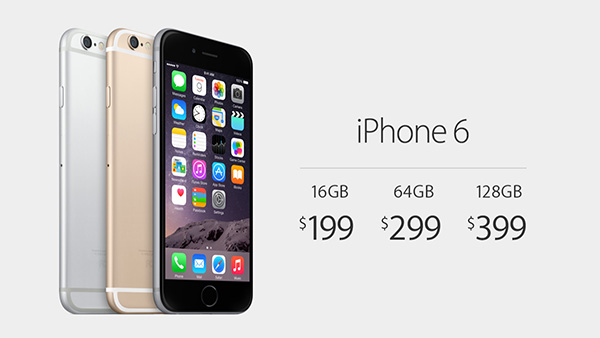 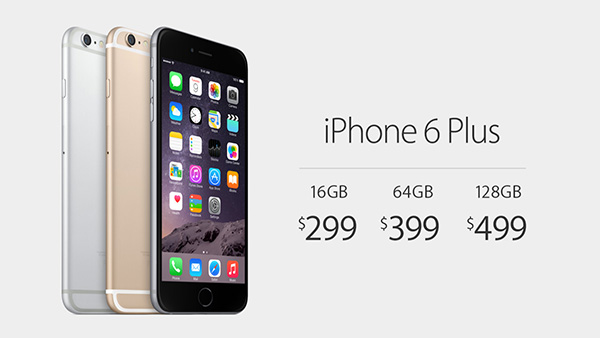 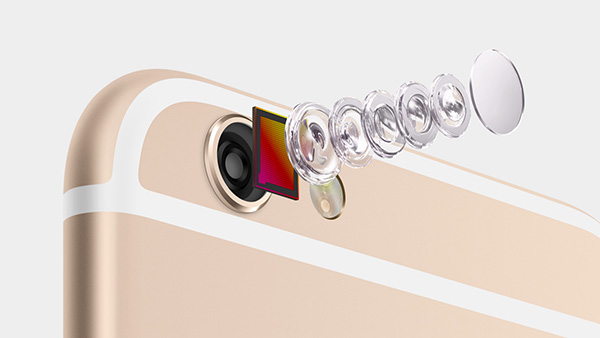 Panoramas will have up to 43 megapixels.

10:28 a.m.
New phones will be capable of Wi-Fi calling -- and transfer to cellular network when you leave the house. (T-Mobile only to start)

10:20 a.m.
New iPhones will use the Apple A8 processor, with twice as many transistors as the A7. Apple Senior VP of Worldwide Marketing Phil Schiller says the A8 is 84 times faster at graphics than the original iPhone.

10:15 a.m.
New one-handed gesture feature called "reachability." Double tap the Home button and the display slides down for you to reach. 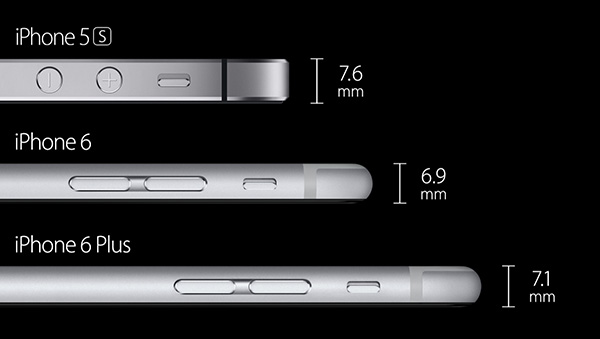 10:08 a.m.
Time Cook: "Today, we are pleased to announce the biggest advancement in iPhone."

10:01 a.m.
House lights going down and video is starting to play.

9:47 a.m.
Media is being seated inside the Flint Center.

9:30 a.m.
Dr. Oz is outside the Flint Center in Cupertino. Could be an indicator that HealthKit, Apple's software for medical and fitness apps, will make its official debut this morning.

Lots of speculation about the white structure outside the Flint Center; whispers of everything from it looking like an Apple store to it being a New York fashion week-style runway. 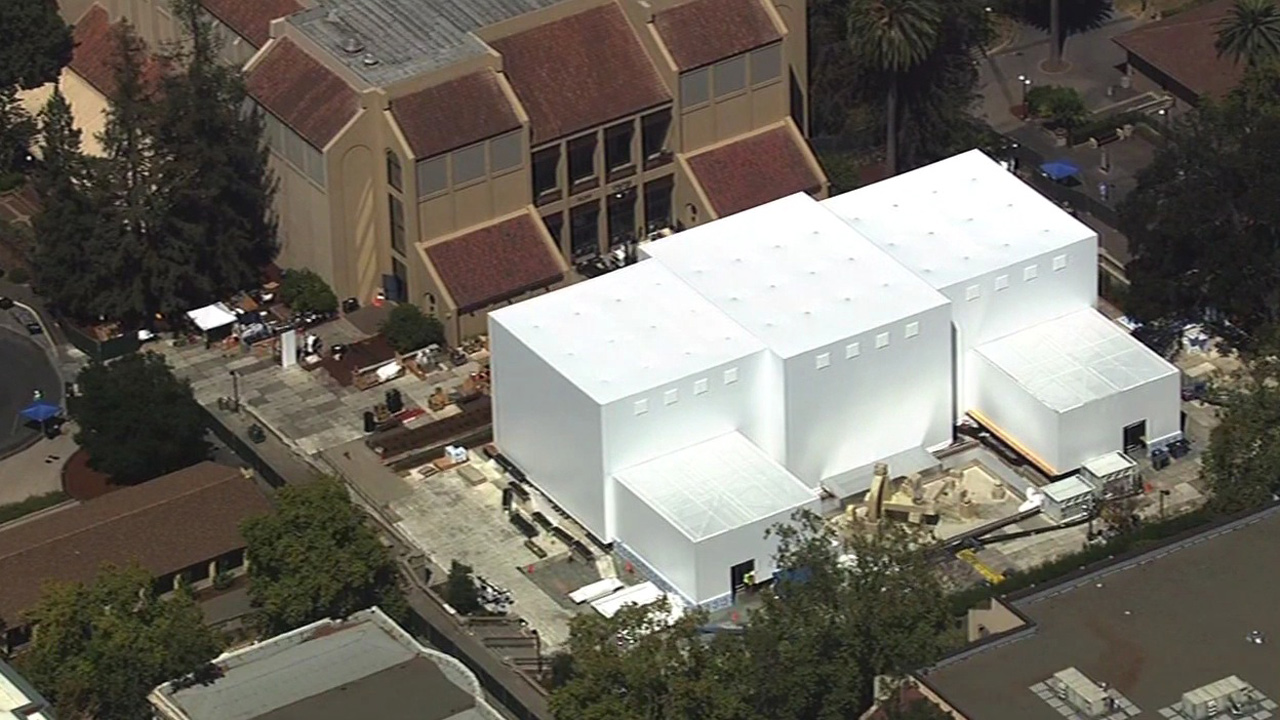