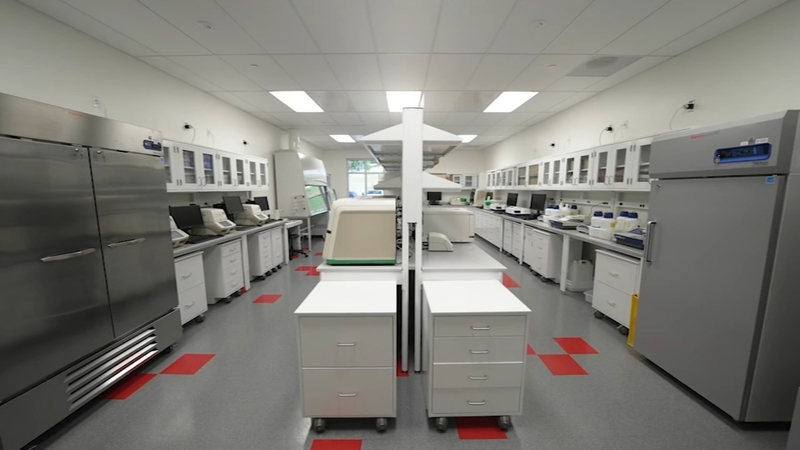 SANFORD, N.C. (WTVD) -- Wednesday, Astellas Gene Therapies officially opened their 135,000-square foot facility in Sanford, the newest company in tech or life sciences to either open or expand operations in the Triangle.

"There's about 14, 15 companies here. Continues to grow. It's manufacturing and research-focused. So we're of course manufacturing here. And from that standpoint, there's a very large existing infrastructure, with the universities, and the (junior college's), and the bioworks programs," said Don Mather, the Executive Director of Operations and Manufacturing for Astellas Gene Therapies' Sanford location, who served as Site Lead.

The Sanford site will serve as a manufacturing facility, working on a number of processes including cell bank storage, cell expansion, microbiology quality control, and process engineering. The company works on studying and developing therapies for patients under neuromuscular and central nervous system programs, and pictures lining the facility show patients who've benefitted from their work.

"It's what we do on a daily basis here. So we're all here to try and improve the lives of patients and their families," Mather said.

Mather, who was the first North Carolina hire, is now one of 70 employees working at the site; he said about 90% are local hires. Eventually, they plan to expand to more than 200 employees over the next five to 10 years.

"We're a very job-focused college, and we go where the jobs are. But even beyond that, we're very involved with companies when they're growing or when they're looking to move to Wake County early on as part of the economic development process," Wake Tech President Dr. Scott Ralls said.

Ralls said they've created programs, in fields ranging from biotech to IT, to cater to those opportunities.

"Our role is to help students and residents of our area to claim those jobs," Ralls said.

The average wage of roughly $80,000 is nearly double the private sector average in Lee County, which is around $45,000, and higher than the statewide average of $58,000. Those disparities are common for the tech and life sciences sector compared to other industries, which has helped fuel a population increase in the Triangle.

"Our average home sale a short six to 12 months ago might have been $250, $280, $300,000. That's sort of a bargain for a lot of Wake County people. So they've been bumping our prices up here," explained John Ramsperger, owner of Sanford Real Estate.

The overall strength of the workforce has been a boon for Sanford.

"We've seen life sciences come a little further on US 1, and they want to be in the Research Triangle region. So we've seen a huge push to fill up our industrial park," Ramsperger explained.

Higher-paying jobs, combined with more people moving in, has also played a role in expanding opportunities for other businesses.

"Public investment of prettying up the downtown and the streets and the infrastructure has led to private investment. So a lot of boutiques and stores and restaurants have been coming into the area to accommodate all the new folks coming in," Ramsperger said, explaining many new buyers already lived in the Triangle.
Report a correction or typo
Related topics:
careerslee countywake countysanfordbiotechnologytherapycareers
Copyright © 2022 WTVD-TV. All Rights Reserved.
TOP STORIES
Toddler and man killed in Raleigh apartment shooting, arrest made
NC company to expand U.S. monkeypox testing capacity
Dangerously hot day to give way to stormy evening
Gas prices decline in Raleigh but experts worry about meaning of dip
Sticker shock for young would-be renters as apartment leases spike
Highland Park parade shooting suspect bought 5 weapons despite threats
Carlos Santana collapses during Michigan concert
Show More
Man dies hours after shooting at Raleigh gas station
Grandfather of woman shot by Fayetteville police searches for justice
What to know if your flight gets canceled or delayed
Raleigh City Council adopts 'social districts' ordinance
Raleigh woman recovering, arrest made in San Diego shooting
More TOP STORIES News