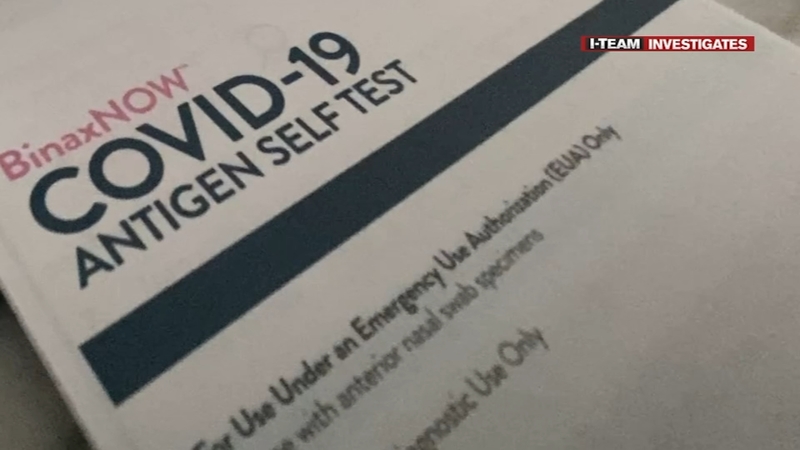 RALEIGH, N.C. (WTVD) -- This week, an average of 60,000 COVID-19 tests were reported daily throughout North Carolina, but that number along with the number of COVID-19 cases could be higher.

Raleigh resident D'Arcy Jackson started feeling COVID-19 symptoms a few weeks ago. Instead of heading to a local testing site, she opted for purchasing a home testing kit from the drug store.

"I didn't feel like leaving the house because I felt so awful. I also didn't want to risk going somewhere and contacting someone and infecting someone if I did have it," Jackson said.

Within 20 minutes and all from the comfort of her home, she was able to confirm she had COVID-19.

More and more individuals are turning to these kits for similar reasons; fast and easy results.

Some companies offer PCR tests that require an individual to collect the sample themselves but send it off to a lab to be tested. Though these tests often take longer, they are considered the "gold standard" of testing. The labs that collect the sample then report that test result to health officials.

The other option is antigen tests that offer "rapid" results. These tests are usually a quicker and cheaper alternative, but the North Carolina Department of Health and Human Services' protocols state that the results don't need to be reported to public health officials. So as more consumers turn to these tests, some question what the impact is on the state's daily case county and percent positivity rates.

"Some people are never going to go to a test site for a variety of reasons or don't have one near them in their neighborhood so while the Walgreens and the CVS and the other at-home test kits are an important strategy we have to marry that with contract tracing and that's what we are trying to work through now," Green said.

"If people aren't building in the underreporting into their models, it's going to make it seem like the increase is less than it is," Reif said. "I think for settings here like a university where we had thousands and thousands of people come and show up from everywhere in the state and they're all living in close proximity. That can be a real danger. If you're not able to make a decision quickly that the caseloads have gotten too high."

He said a lack of reported testing can affect how health officials make decisions to protect the public and have long-term effects.

"Every test result not reported is potentially not contributing to information about variants spread and that can be problematic as well if new things pop up and they're not being detected as quickly as they should be," Reif said.

A spokesperson for NCDHHS said the state uses multiple metrics to ensure the "most accurate picture of the spread of COVID-19." NCDHHS also said it is considering options for capturing home test results in its surveillance systems in the future.

"I don't expect rapid tests to cause people to flee the health system. I think it'll actually bring more people to the health system because when people find out that results are positive, they're going to want to know what to do and they're going to have to reach out to their provider," Brown said. "I'm not worried about large undetected outbreaks at all I think will detect more outbreaks."

Everlywell was one of the first companies to seek an FDA Emergency Use Authorization for its at-home test kits.

Brown does also recommend that individuals follow up with health providers and consider a PCR test if their rapid test is positive.

"When we empower consumers to test themselves which means more people will find out if they are infected with COVID. The more people that know they have COVID, then we can interrupt transmission," Brown said. "You can isolate immediately and then follow up with your physician or your provider for confirmatory testing and for a plan."

Another thing to keep in mind when choosing an at-home test is the purpose of the test. For international travel and for reentry into a school in North Carolina, a PCR test is required. Again, PCR results go to a lab and are a little more accurate than the rapid tests.

Brown also recommends you pay attention to the date that you perform the test.

"For all tests, when you test matters," she said. "Let's say you were exposed to COVID today, and you got tested today, you will likely be negative, even if you even if you've been infected."