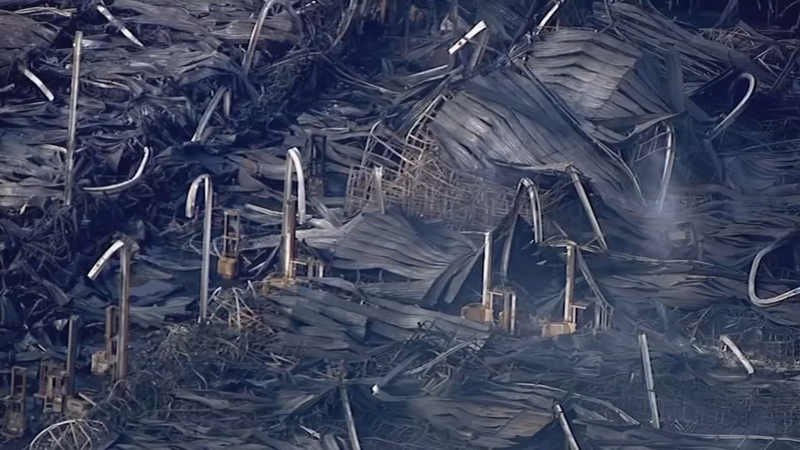 "Our (National Response Team's) focus is going to be right here on-scene, trying to determine that origin and cause. And then, of course, the investigative portion, with the special agents from our field offices are going to be working as well. So if you look at it that way, you've really got two investigations going on. One on-site here, and then, of course, interviewing employees and things of that nature," said Vincent C. Pallozzi, the ATF Special-Agent-In-Charge from the Charlotte Field Division helping oversee operations.

The fire broke out around 2 a.m. Saturday morning, with about 300 workers on-site. Sunday, the Edgecombe County Sheriff's Office confirmed they found the body of 21-year-old Kevon Ricks, a contractor.

"Tragically for the community, someone lost their life. So this tragedy started for the community of Rocky Mount on Saturday when this fire began. We've got thousands of people who are now unemployed. We're here and going to do everything we can to give those folks closure on how this whole thing started," said Pallozzi.

At this point, there is no timeline for the investigation; engineers are initially focused on ensuring the site is safe for authorities to access. Pallozzi discussed what they look for in these types of investigations.

"Was it arson or was it accidental? And that's where those engineers come into play. That's where all these folks on-site here will systematically go through fire protection engineers, what systems were working, what systems weren't working. Were there any electrical issues? The K-9s, the accelerant K-9s will go through if there's any detection of any accelerants," explained Pallozzi.

Wednesday, the Rocky Mount Area Chamber of Commerce and Carolinas Gateway Partnership announced the formation of The Edgecombe/Rocky Mount Employees Assistance Fund. It's been set up through the United Way Tar River Region, with donations going directly to QVC workers.

Outside the donations, Carolinas Gateway Partnership is working on job sourcing opportunities.

"We've just got a lot of availability of jobs already, it's just a matter of matching up the interest and skill level of the employee and get them together and sit down and say 'okay, this is where you go to work if you want to. That's up to you,'" said E. Norris Tolson, President and CEO of Carolinas Gateway Partnership.

QVC is continuing to meet with employees in small groups and has pledged to issue paychecks through the end of the year.

Tolson said he has heard from a number of companies and businesses interested in connecting with affected workers about employment.

"It's going to take a long time to get through all those in small groups. Once QVC gets through with that process, and the employees that were there start to figure out what is it (they) want to do, what we're going to be ready is the apparatus to say, we've got the apparatus in place, you just tell us 'Here are the jobs that are available, you tell us which ones you want to go talk to,'" said Tolson.

Both David Farris, President and CEO of The Rocky Mount Area Chamber of Commerce and Tolson said they believe the economic effect of the lost jobs will be largely felt beginning next month.

"The objective now is to see if we can help our friends and neighbors find employment. Because January, February, March, and April these people are going to be looking straight into the eyes of no employment at all unless they've found a job by then. So our mission is to help get them employed," Tolson explained.

If you're interested in donating, you can do so online at this site or mail or drop-off donations to: