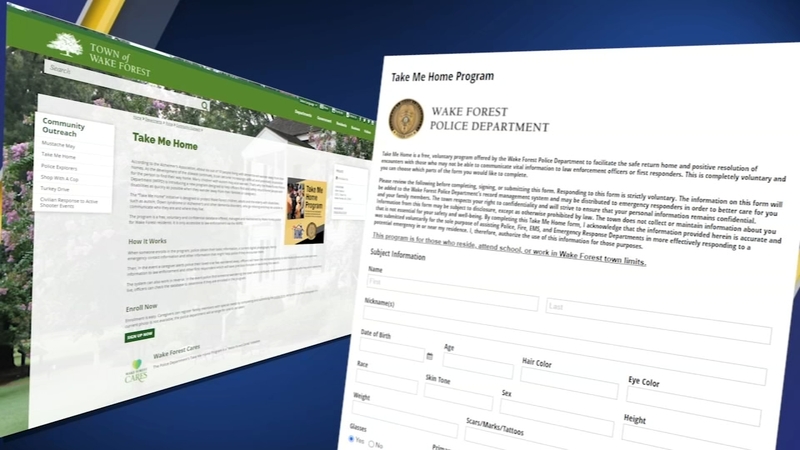 WAKE FOREST, N.C. (WTVD) -- We hear about it all the time, someone with a cognitive impairment wandering away.

The Town of Wake Forest now has a way save precious time for police when they find someone wandering or when someone is reported as missing.

Even under the best monitoring, children and adults with special needs can sometimes slip away, like when a visitor accidentally leaves a door open.

There needs to be a plan for a way to find or identify them quickly according to Wake Forest resident Kim Harrison.

"Anything that can save even five minutes, 10 minutes that you're delaying with the police officer when there's a child missing or adult missing is not a waste. It is a lifesaver," Harrison said.

Harrison has an 11-year-old daughter with autism who doesn't speak.

Ava has never wandered away from home, but her mom said parents of every child with autism worry about it happening.

"Just because she hasn't yet doesn't mean I have that peace of mind that she won't," Harrison said.

Ava is not the only person in her family that has autism.

Harrison said her cousin has autism, and he does wander.

"It does make me able to see what I do need to prepare for," she said, "They've had several instances where he's gone missing."

Harrison said she went to the Wake Forest Police Department web page for their new program called Take Me Home which is aimed at registering people with autism, Alzheimer's, or other cognitive impairments.

She signed up for it in just 15 minutes and now police have a thorough profile of Ava including pictures.

The person who oversees the new program says the idea was hatched a couple of years ago when an elderly man wandered away from a Wake Forest senior center.

"One of the telecommunicators at the time actually asked if we had a program that listed any of the people in town with cognitive impairments. And we did not," said Dawn Hartwick the police department's telecommunications supervisor.

So Wake Forest PD designed its program after one in Pensacola, Florida.

And now with the data provided by caregivers, the department can quickly issue missing person bulletins with pictures and other descriptive information.

And if an officer finds someone wandering, they can simply enter a description in their computer and the program will provide pictures that best match.

"We're doing something now that can help later," said Harrison who is now urging anyone who has a family member with a cognitive impairment and lives, works, or goes to school in Wake Forest to register.