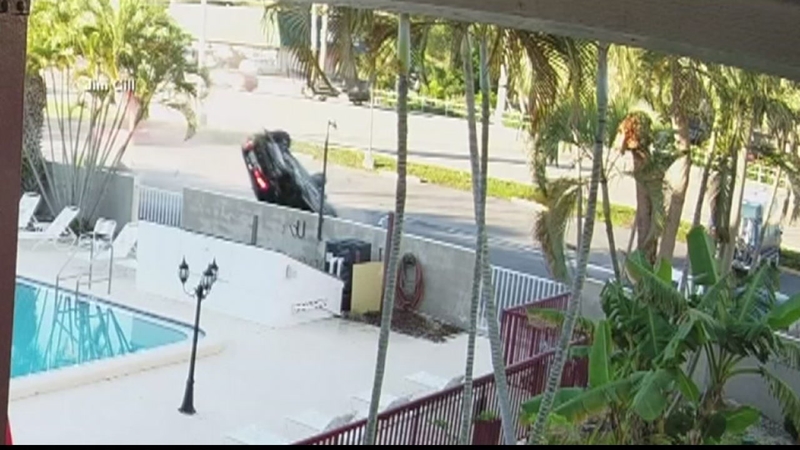 MANATEE CO., Fla. (WTVD) -- Surveillance video captured a hit-and-run that resulted in one car flipping over at least four times.

Video shows a silver 2003 Kia Sorento turning left across three lanes of traffic. It appears a dark-colored Audi driving toward the Sorento swerves in an attempt to avoid a collision, but it's too late.

The Sorento hits the swerving Audi and sends it into the air, flipping over at least four times, hitting a parked vehicle and skidding across a concrete wall before coming to a rest upside down on top of a gate surrounding a hotel pool.

"People were hollering call 911 and it was just a bit of chaos at first," hotel guest Kathy Brown told local ABC affiliate WFTS..

"(it was) so bad, I didn't know what to do until somebody came with an ambulance, only thing we had to wait on," Donald Fuchs said. "He was bruised up pretty bad."

The driver of the Audi, 19-year-old Jackson Maxwell Kelly, was taken to the hospital in critical condition.

The driver of the Sorento sped away from the scene immediately following the crash.

"It's unforgivable, no matter what," Brown said. "Even if there is nothing you can do, you need to stop and see if you can do something."

Law enforcement in Manatee County has found the van but is working to track down the Sorento's driver.