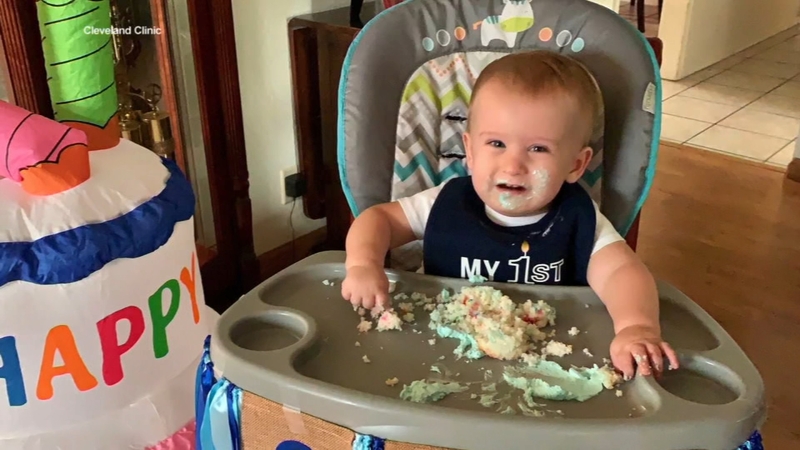 A baby whose birth defect was repaired while he was still in his mother's womb celebrated his 1st birthday, and it's something his family says they are thankful for.

In 2019, when Kim McCaw found out her unborn baby, Tyler, was diagnosed with a serious neurological defect, she hit the road for help and answers.

Kim's son was diagnosed with spina bifida, where the spine does not form properly, exposing it, which can lead to nerve and possible brain damage.

But a unique procedure that was done during pregnancy gave him a fighting chance at walking one day.

Babies with spina bifida typically undergo surgery to cover the spinal cord a few days after birth, but some hospitals operate before the baby is born, in utero, to help reverse the damage and allow the brain to form normally. That's exactly what doctors did for Tyler, but it was not easy.

After being turned away from one hospital, Tyler's parents traveled 14 hours from Oklahoma to the Cleveland Clinic for help. Four days after they arrived, at 26 weeks along, Tyler's mom went into surgery.

"There's a risk to doing it before birth, but if you take 100 children, more than not will have a significant benefit from doing it before birth," said the director of fetal surgery at Cleveland Clinic, Dr. Darrell Cass. "We keep the baby nicely floating in fluid inside the uterus but the back is exposed and we work on the back."

During the surgery, doctors carefully put the nerve and spinal cord elements back inside the spinal canal and muscle and skin to cover them. Once that is done, the uterus is closed.

After the surgery, Kim was monitored carefully, and eight weeks later, Tyler was born by cesarean section.

"We think now, he will have the best long-term outcome of avoiding any risk of hydrocephalus (spinal fluid in the brain) and having the best motor performance of his legs and the best ability to walk independently," Kim said.

It's been more than a year since Tyler's surgery. His parents say he is making progress and doctors are telling the McCaws that Tyler is expected to walk in one to two years.

In the meantime, he is still seeing spina bifida specialists in order to ensure his legs, bowels and urinary habits continue to develop and function normally.