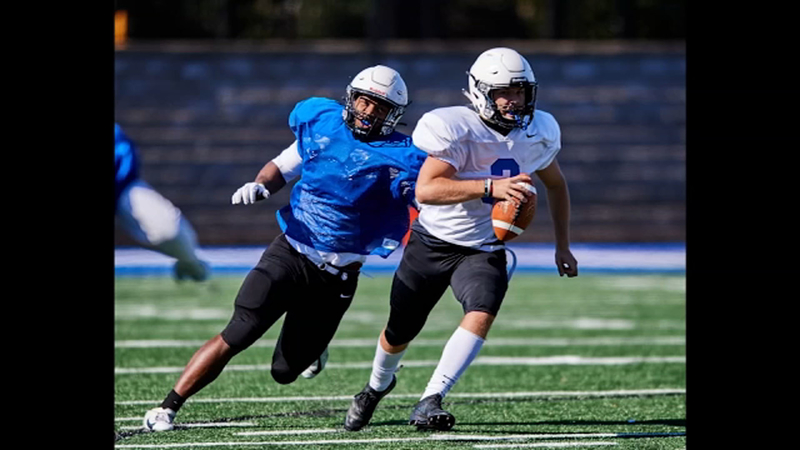 WILSON, N.C. (WTVD) -- It's been 71 years since football was played at Barton College, then known as Atlantic Christian College.

The Little Christians back then have long ago been transformed into Bulldogs. The school announced in 2018 that it was re-starting the program.

Chip Hester was shortly afterward announced as head coach, hired away from North Carolina A&T, where he had spent the previous three seasons as offensive coordinator.

Fast forward nearly three years and what was once just a notion will soon be a reality.

At 2 p.m. Saturday, Truist Stadium will be home to college football as the Bulldogs take on Erskine

Hester spoke to ABC11 about the wait, the excitement and the anxiety of opening day for a whole new program.

"I'm really proud of them because it's been a long haul, and we've got guys on this team that have been practicing for literally two years without a competition, so they're anxious to get out there," Hester said. "It's been a long time, so I'm excited. Football coaches want to coach football in ball games, so I know I'm excited, I can feel our guys are excited. We have a 6 a.m. workout this morning and there's a little pop in their step. They're anxious to get after it, that's for sure."
Report a correction or typo
Related topics:
sportswilsonwilson countynccollege football
Copyright © 2021 WTVD-TV. All Rights Reserved.
TOP STORIES
LIVE: Biden, Putin meet for long-anticipated summit
Rape suspect shot by police chief in Newton Grove: Sheriff's office
NC tax revenue soars, $6.5B windfall predicted by mid-2023
Ebony Anglers compete in 2021 Big Rock Blue Marlin Tournament
3 sunflower fields open to the public this year in Raleigh
Raleigh charity giving away 500 fans
Sen. Tillis co-sponsors bill to defund '1619 Project' in K-12 schools
Show More
Garner teens rescue classmates from burning car
Israeli military launches airstrikes in Gaza
Cary 16-year-old Claire Curzan is living her US Olympic dream
Outdoor dining should stay: Downtown Raleigh survey
Developers want to build two 40-story towers in downtown Raleigh
More TOP STORIES News