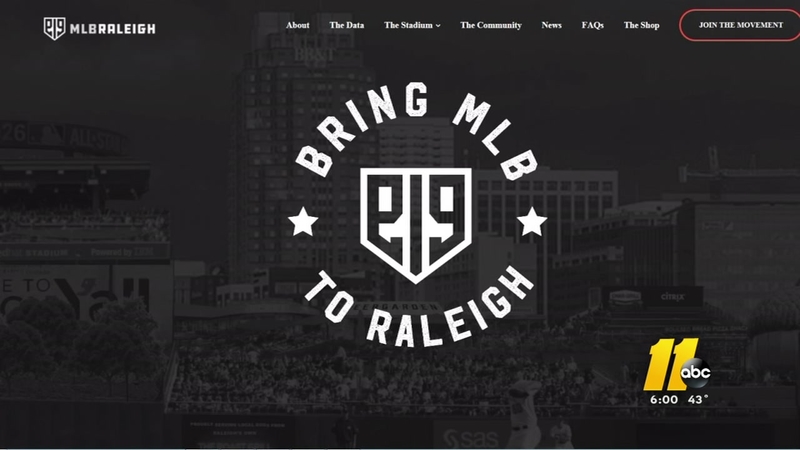 RALEIGH, N.C. (WTVD) -- A new grassroots effort called MLB-Raleigh is hoping to score big support and reel Raleigh in as a top contender for a new Major League Baseball team.

The campaign tweeted Tuesday that it has officially declared the Capital City a candidate for a franchise and is urging people to join the effort.

But, as far a logistics, there's a lot to figure out.

There’s grassroots efforts to make Raleigh a top contender for a new MLB team! It’s called @MLBRaleigh. The campaign even has some renderings where a stadium could be built in Oak City. #Raleigh #Basebal #MLB #MLBRaleigh #ABC11 @MLB @RaleighGov pic.twitter.com/ZAxjuddSbO

"It would be awesome," said resident Charles Boyer. "I think it would be great for Raleigh if we could get it, if it doesn't cost taxpayers a bunch of money to build a new stadium somewhere."

The campaign is bouncing around ideas about where a baseball stadium could go, and there are even renderings.

The most ambitious idea would be replacing Central Prison with a sports venue.

"I don't know how feasible it is to move Central Prison, but it's a good idea," said Boyer.

Campaign Organizer Lou Pascucci says the proposals are just conversation starters and agrees, the Central Prison plan would be the least likely to happen.

"The amount of passion for baseball in this area is it huge, but it is hidden," he said. "There is a lot of money here. There's a huge TV market. I think it's important for Raleigh to get organized because there's no doubt the numbers say we should be a player in this thing."

The Raleigh Tourism Department is not involved in the campaign, nor has been it contacted to join in the efforts.

"The 'Bring MLB to Raleigh' grassroots campaign and the local businesses behind it have no doubt shown the passion that makes us all proud to call Raleigh home," Visit Raleigh & The Greater Raleigh Sports Alliance said in a statement to ABC11. "We admire their vision. This area has a deep baseball tradition and vibrant baseball culture, spanning decades at all levels - professional, collegiate, amateur and youth. Adding an MLB team in Raleigh would no doubt be an exciting development. But we cannot comment further as it is still conceptual at this point."

"There are lots of hurdles and we know that," Pascucci said. "We're not jumping in here saying, 'This is going to be simple.' But we're also years off of this thing happening, and we're trying to get the ball rolling because nobody else has."

A kickoff party is slated for Saturday, April 13 at Trophy Brewing and Taproom from 1:00-4:00 p.m.
Report a correction or typo
Related topics:
sportsraleighmlbbaseball
Copyright © 2022 WTVD-TV. All Rights Reserved.
TOP STORIES
Snow, sleet, freezing rain expected again this week
NC legislature votes to further delay primaries until June 7
Third arrest made in Black Friday shooting at Streets at Southpoint
Daniel Turcios shot 5 times after crash on I-440, RPD reports
'He was special': Durham friends remember Andre Leon Talley
'We can't get any more': Store struggles to restock shelves
Victim in fatal I-85 crash was just 3 months old
Show More
19-year-old charged in wreck that left 2 Marines dead
Earnhardt Jr. to be inducted into NASCAR Hall of Fame
Raleigh man feels lucky to be alive after bullet found above his bed
2-year-old accidentally shot himself in Harnett County
Biden, 1 year in, says nation weary from COVID but in a better place
More TOP STORIES News