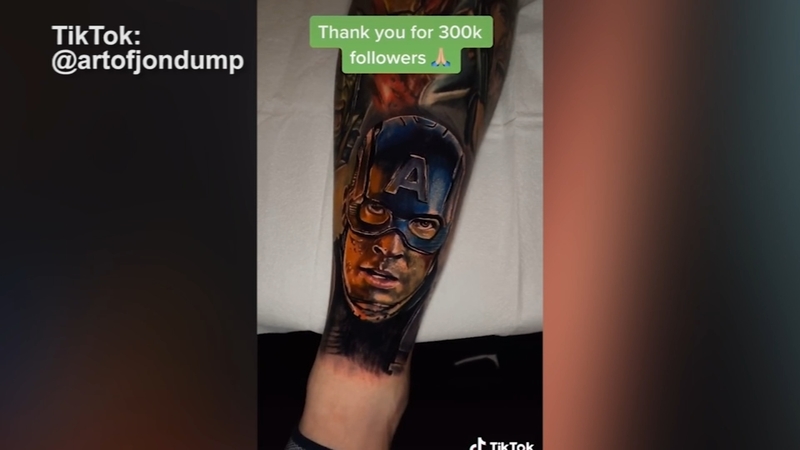 FAYETTEVILLE, N.C. (WTVD) -- For most of Jonathan Dump's life, the ink and the needle have been his choice of tools.

"I've always had a passion for art," he said.

It's a passion the Fayetteville native says became a real interest of his at the age of 14 or 15.

"Jon" has been bringing his artistic skills to a local tattoo parlor known as the "Best Ink of Fayetteville" for nearly 10 years, spending that time perfecting his two favorite styles: "I think for the most part portraits and realism is where my focus is."

'He needs to be stopped': Customers angry at Raleigh tattoo artist who took their money and vanished

His hyper-realistic tattoo pieces have brought forth loyal customers like Zack Mcclanahan who said that he's been returning to Jon for a couple of years.

"It's been great work. Every time I come in with a piece or an idea, I just give it to Jon and he makes it happen," Mcclanahan said.

Jon's work has also received the attention of millions on the popular video app TikTok where he's posted many of his tattoo portraits. Portraits of famous musicians like Meg The Stallion, Lil Nas X, and countless other celebrities have created quite the fan base. Those same musicians even recognizing Jon's work on social media, spreading his talents to even more people.

Jon started posting videos on the app during the pandemic. His videos picking up some real steam and notice in November.

Since then, the Fayetteville tattoo artist has collected a whopping 7.5 million likes, received up to 5.6 million views on one of his videos, and gained more than 600,000 followers.

"I am very shocked. If you would've asked me ten years ago, when I started tattooing, if this would be going on, I would tell you that you were crazy," Jon laughed.

This new fame has translated to lines outside the Skibo tattoo parlor and even brought new clients from out of state.

"I did a portrait of Garth Brooks, and (the client) flew in from Mississippi," Jon said.

Jon said this local celebrity status and worldwide attention won't change who he is and is honored to be representing Fayetteville.