Beto O'Rourke's interruption at Uvalde news conference was not planned, his campaign says

O'Rourke, who is running for governor, rushed the stage after Abbott described the need for more mental health programs.
ABCNews
By Bill Hutchinson 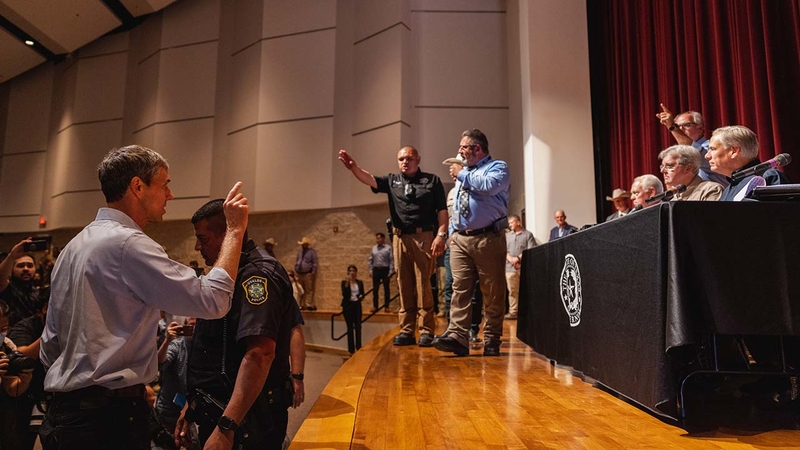 UVALDE, Texas -- Former Rep. Beto O'Rourke, D-Texas, interrupted a press conference from Texas Gov. Greg Abbott about the Uvalde shooting Wednesday, shouting at the current governor before being escorted from the auditorium.

O'Rourke, who is running for governor, rushed the press conference stage after Abbott described the need for more mental health programs in the state that he said might have headed off the massacre.

"This is on you," O'Rourke yelled, directing his comment at Abbott. "You are doing nothing... This is totally predictable when you choose not to do anything."

People on the stage began yelling back, telling O'Rourke to sit down and that this was no place for politics.

The one-time lawmaker was then escorted out of the venue.

Despite the emotional response, a representative from O'Rourke's campaign told KTRK-TV the confrontation wasn't planned. O'Rourke arrived in Uvalde to visit victims' families who invited him to join them at the governor's event.

O'Rourke's moment arose in response to hearing Abbott say what the candidate's camp said was the same thing the governor expressed in the wake of the 2019 mass shooting in El Paso, which O'Rourke represented in the U.S. Congress.

O'Rourke continued to rip into Abbott after he was thrown out of the venue.

"He says, 'This was unpredictable.' It was totally predictable, and I predict this will continue to happen when you continue to have a governor who will not stand up for the people of Texas," O'Rourke told a crowd of reporters.