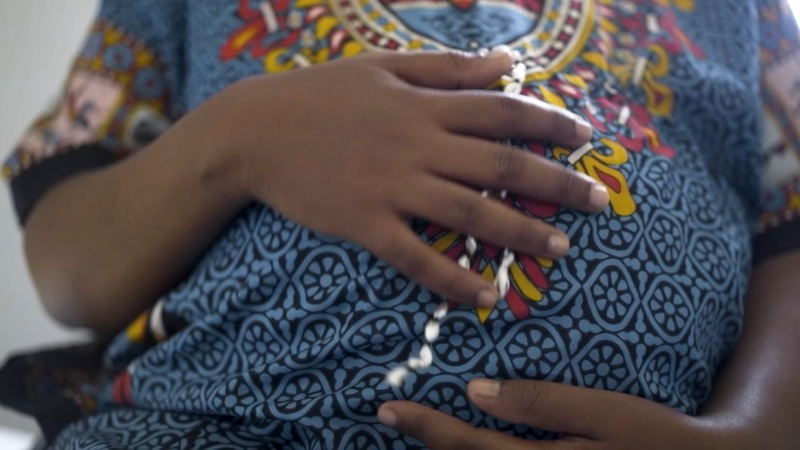 DURHAM, N.C. (WTVD) -- Extreme exhaustion and nausea are just a few symptoms that Durham resident Charity Watkins experienced just days after delivering her newborn daughter Margeaux. It's a day she will never forget.

"I thought I was having a heart attack," said Watkins. " I remember one night having this sharp pain in my arm and chest. The first time it happened it went away within 10 minutes. The second time, a couple days later at that time, I asked my husband to take me to the hospital."

She waited five hours in the waiting room at UNC Hospital without treatment. At the time, Watkins was a student at UNC-Chapel Hill. She opted for treatment at campus health a few days later. Almost immediately, that doctor ordered X-rays. He was alarmed at the heart-swelling.

"He literally had me rolled down to the same emergency room I waited in just a couple days before where I was finally admitted. I was told I had heart failure with my heart functioning only at 5%," she said.

Watkins was diagnosed with peripartum cardiomyopathy, an uncommon form of heart failure that happens during the final month of pregnancy up to five months after giving birth. Black women are at a higher risk of developing this condition.

On Tuesday morning, the National Urban League released a report on the state of Black America. With this week marking Black Maternal Health Week, data shows Black women are three times more likely to die from a pregnancy-related cause than White women. According to the CDC, most pregnancy-related deaths are preventable. Yet, each year 700 people die as a result.

The Durham-based nonprofit has a mission of saving the lives of black birthing people and their infants while improving access to services. Since its launch, they've provided financial services to more than 100 moms in the Triangle while educating them on how to advocate for themselves in the birthing room.

"You need to have a support person with you. It could be a family member, friend, partner or doula, another birth advocate. There is strength in numbers," she said.

Six years after Watkins experienced that traumatic incident, she has dedicated her life to educating Black women on unconscious bias in healthcare. Her daughter Margeaux is now six years old. She is forever grateful to that doctor at campus health who ordered her X-rays.

"If he hadn't listened to my concerns, that one doctor, I would have lost my life and that is scary to think about," said Watkins.