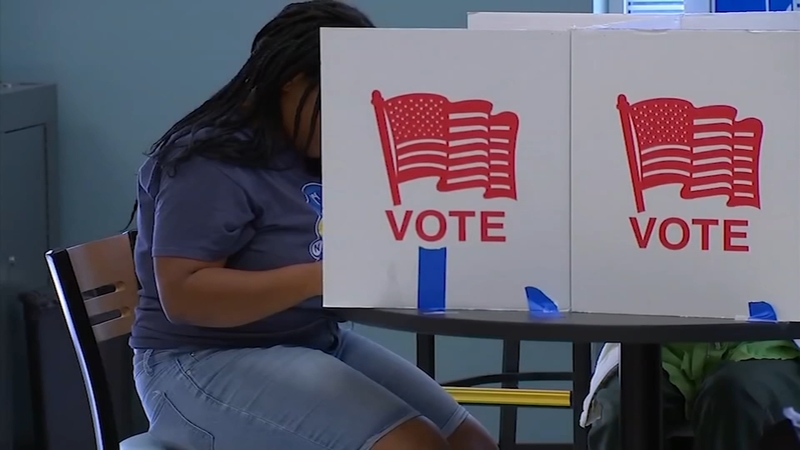 Blexit NC aims for shift in thinking among black voters

RALEIGH, N.C. (WTVD) -- Danielle Robinson is a newly registered Republican in Raleigh. But the bold choice has been met with concern from her family and online backlash and name-calling from strangers.

"There's coon. There's Uncle Tom. It's just sad that as black people, we limit the expression or the journey of other black people," Robinson said. "I'm tired of the idea that the Left thinks that they can have black people in their pocket."

Nearly 1.5 million black voters are registered in North Carolina, and nearly 80 percent of them are Democrats, according to the State Board of Elections.

But there's a movement afoot to get black voters to leave the Democratic Party, one that has fueled voters such as Robinson to abandon politics as usual.

Robinson is state director for Blexit North Carolina. The group launched this month in Charlotte with a rally on MLK weekend.

"That rally signaled that black people, we are ready to have that discussion," Robinson said.

Blexit NC said it will hold forums to discuss candidates on the left and right running for local and state races. The group also plans to encourage people of color to consider new ideas without influence from Democrats.

Democrats are dismissive of the idea.

Robert Howard is the state's Democratic Party spokesman. He released a statement critical of the organization and the media, saying: "Blexit is a fringe organization started by a far-right provocateur. It's embarrassing any news outlet would lend credibility to this organization when they deserve none."

"We don't need to worry about Candace Owens," Robinson said of the woman who started the Blexit movement. "She has found the end of her journey. We've got to worry if we are on our correct journey and on our correct path."

Dr. Hasan Crockett is a political science professor at St. Augustine's University in Raleigh. Crockett said blacks have consistently supported Democrats ever since the passage of the Civil Rights Act of 1964, a move signed into law by a Democratic president, Lyndon B. Johnson, but also fiercely opposed by many Democrats in the Senate, particularly in the South.

Crockett said controversies around voter suppression and gerrymandering will be challenges for Blexit.

"The fact that they are looking at African-American issues and to empower the black community -- fine. But when you talk about moving into the Republican Party that has a historical agenda that opposes black leadership, suppresses the black vote, that has minuscule presence in the black community -- I think you're going to run into so many problems," Crockett said.