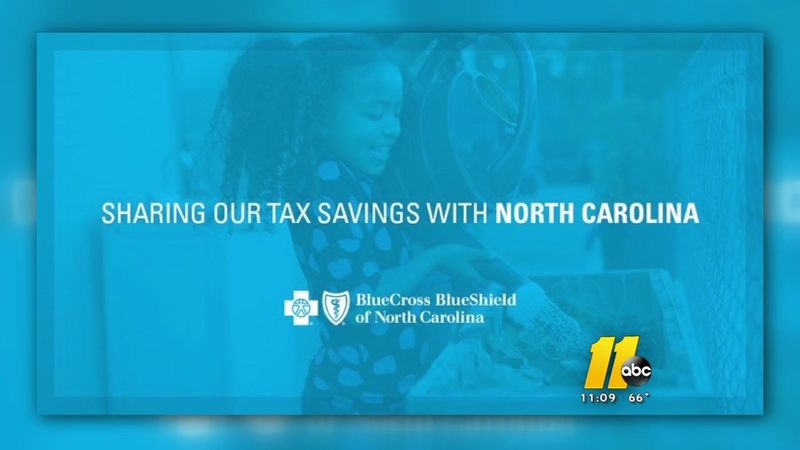 Some Triangle families are wondering why they're paying more for health insurance when Blue Cross Blue Shield NC is giving away tens of millions of dollars.

North Carolina's largest health insurance company announced Thursday its plan to donate $50 million to North Carolina charities, non-profits and health-care initiatives across the state. It will also give out bonuses for employees - thanks to the new tax-cut law in Washington.

We’re sharing our tax savings with North Carolina by investing in key community health initiatives to improve the health and well-being of our communities. Learn about our $50M contribution https://t.co/Rw4PFsv1ex #health #communities #NC pic.twitter.com/UrGFdFry6Q

"This is just the most exciting news," said Leigh Duque, executive director of Interact.

The nonprofit is Wake County's only provider for victims and survivors of domestic violence, rape and sexual assault - serving 9,000 direct victims a year, 365 days, 24 hours a day - with a staff of just 50.

And with Blue Cross investing $2 million of its $50 million donations at Interact (the largest donation in Interact's 40-year history), an expansion of Interact staff and services is now a viable reality.

"(Interact can now create) a tighter more cohesive, more supportive weave of services here in our community for victims of domestic and sexual violence as a result of this transformative gift," Duque said.

Mike Morand was one of several Blue Cross customers who was not cheering when the company announced it was sharing the savings of the recently passed tax cut deal with its massive community donations.
"I'm disgusted and everybody that's a customer of Blue Cross should be," Morand said.

Morand's wife, Tonya, suffers from Multiple Sclerosis. And he's struggled with Blue Cross through the years to get treatments and medications covered.

He's an independent trucking consultant - he pays his premiums out of pocket to the tune of $22,000 a year.

"If (Blue Cross) has got money to burn, then those premiums should come down," Morand said.

In a statement to ABC11, Blue Cross said, "The tax cut was announced after we had already filed our 2018 premium rates. That's why most customers won't see the effects in their rates until 2019. Even if premiums still go up, they will go up by a lesser amount than they otherwise would have."