'I knew immediately I was in trouble': North Carolina couple describes coming face-to-face with rabid bobcat in driveway 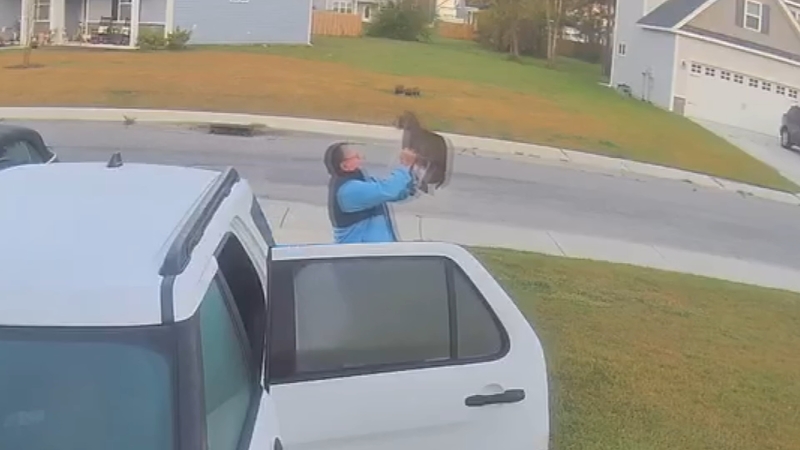 BURGAW, N.C. (WTVD) -- A North Carolina couple knew they were in trouble the moment they came face-to-face with a rabid bobcat in their driveway.

The Pender County Sheriff's Office confirmed that the bobcat seen on a viral video posted to social media was indeed the animal that tested positive for the deadly virus.

The video was recorded from a home security system on April 9 in a Burgaw neighborhood.

Footage showed Happy and Kristi Wade coming out of their house in the morning on April 9.

Kristi said she knew something was wrong as soon as she heard a growl in the driveway.

"When it came around the car and it made eye contact with me, I knew immediately I was in trouble," Kristi said.

Video surveillance showed the bobcat running across the street from a neighbor's house and into the driveway.

"It first attacked my hand that I held behind me to try to fend it off, and then I felt it crawl up my back," Kristi said.

"I kind of shoved my arm in there, that's why I ended up with it face-to-face," Happy said. "It's not really until I get it a few steps away that I look at it and I realize it's a bobcat and I say, 'Oh my god, it's a bobcat.'"

As Happy tried to carry the bobcat away, it sunk its teeth into him multiple times.

"The third time it bit me, I could actually feel the tooth on my bone because there's no skin there," Happy said. "And that's when I realized and that's when I flung it."

Instead of running away into the woods, the animal ran back toward the house and into the garage. Happy said he could tell something was wrong.

"I knew because of the way it acted that this is not normal behavior for a bobcat," Happy said. "Only a bobcat that was rabid would do this."

According to WWAY, Happy made the decision to shoot the rabid bobcat as neighbors called 911. The Wades are concealed carry permit holders.

"At one point, it kind of made a charge again and I was able to shoot it in the shoulder," said Happy.

Three days later, test results from a Raleigh lab confirmed the bobcat did have rabies. The Wades are now being treated for the virus.

A neighbor who was also injured by the bobcat is in the hospital recovering.

The couple has two cats and a dog, all of which are rescue animals. The Wades said they love animals and didn't want one to die, but felt they did what was necessary to protect themselves and their neighbors.

"It was very scary, it makes me think a little bit when I walk out my front door to water my flowers on my porch," Kristi said. "Never have thought about it, probably shouldn't anymore, you know this was a freak thing."

In light of the positive rabies test on the bobcat, the sheriff's office took to social media to remind residents to get their pets vaccinated and to follow the following guidelines: