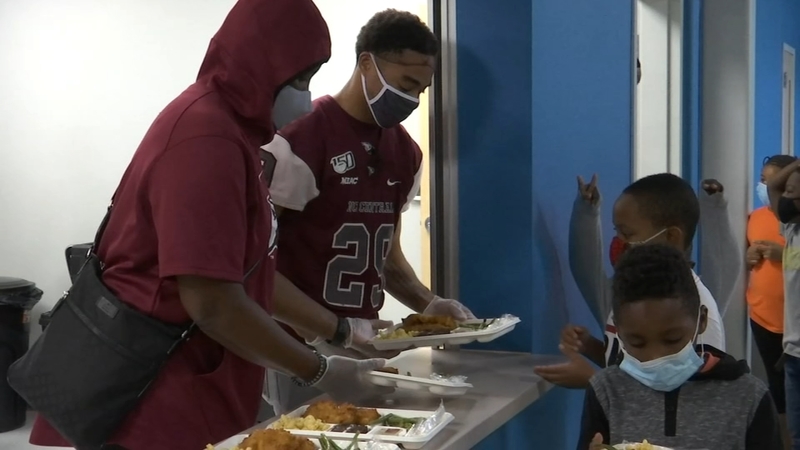 DURHAM, N.C. (WTVD) -- NC Central Athletics, the Durham Bulls and Blue Cross Blue Shield of North Carolina teamed up to hand out more than 2,100 lunches to the children at the Boys and Girls club in Durham as part of a six-week outreach program.

"To see that the boys and girls club realizes and recognizes the need to feed kids during this time, it's huge," said NC Central women's basketball coach Trisha Stafford Odom. "I just helped serve, and I tried to sneak a piece of chicken. It's good food. They're not doing it out of obligation; you can tell they are pouring in some love and thought into the situation. It's a big deal."

"I think it's good because some people don't eat at home so they rely on meals," Najih said. "Now, they've got something healthy and good they can eat instead of being hungry."

Before lunch, members of the NC Central athletics department shared their own stories of what it takes to be successful.

"It brings me a lot of joy because it wasn't too many people that came and talked to me like I talked to the kids today," NC Central football player Stephen Stokes said. "It really humbles me to learn that I can be a role model in someone's life."

Stafford Odom said it was gratifying to see the effect on youngsters.

"It's huge to get a visual of the young man from NC Central who came and spoke, there's some little boy that said, 'I can be him,'" Stafford Odom said. "Equally, the young girls say, 'I'm going to grow up and be like Coach Trish.' It means the world, and you don't even realize it at the time."

Najih has been coming to the Boys and Girls club since he was in kindergarten.

"It sounded good because that's the school I want to go to when I get older," Najih said.

He said days like this remind him to never give up.

"I learned that hard work pays off, and that you got to focus on what is your end goal," Najih added.

The coaches and athletes benefit as well as the children.