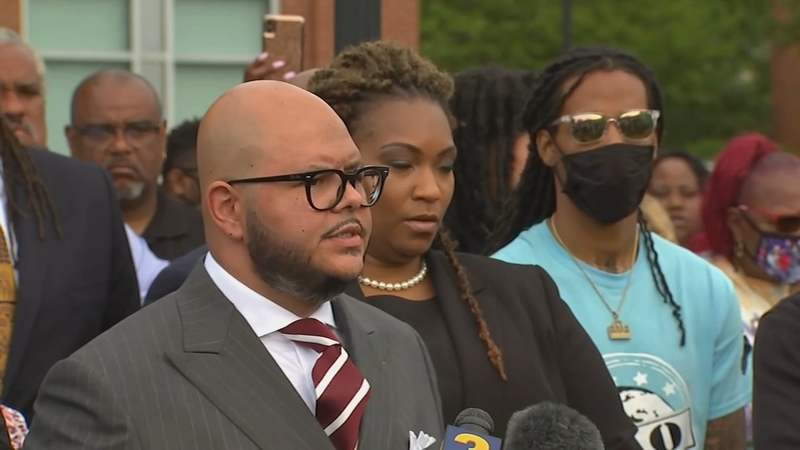 ELIZABETH CITY, N.C. -- Andrew Brown Jr.'s family attorneys on Tuesday said that the nearly 20 minutes of body camera video they watched reaffirmed what they already believed based on what the previous snippet they watched showed: that his killing was not justified.

The family arrived at the Pasquotank County Sheriff's Office around 3 p.m. on Tuesday to watch the video.

There is more than two hours of body camera video of the incident, but a judge ruled the family would only be allowed to watch 18 minutes of it. The judge said the rest of the video does "not contain images of the deceased, and thus are not appropriate for disclosure at this time."

The family attorneys said after viewing the video they were permitted to see that they believe it shows pretty much the full story of what happened.

"At no point did we see Mr. Brown pose a threat to law enforcement officers," one of the family attorneys said Tuesday.

District Attorney Andrew Womble previously said Brown made "contact with law enforcement officers" with his car before they shot him.

Family attorney Chance Lynch on Tuesday said that's not what the video shows.

"At no point did we see Mr. Brown pose a threat to law enforcement officers," said family attorney Chance Lynch.

"We were able to see Mr. Brown sitting in his vehicle -- that he was ambushed as the sheriff's office made their way to his residence," he said during a news conference. "Appearing to be surprised. At all times his hands were visible. At all times he did not appear to be a threat."

He said, in fact, that Brown went in the opposite direction of deputies.

"What we saw at all times were police officers on the pavement unloading their weapons," he said.

Lynch said they had a hard time counting the number of bullets that were fired.

"There were so many shots," he said.

He reiterated: "At no point did we see Mr. Brown pose a threat to law enforcement officers."

Brown's son Jha'rod Ferebee said he thought the shooting never should have happened.

Brown was behind the wheel of his car and outside of his house in Elizabeth City when he was shot by deputies on April 21. Sheriff's deputies working as part of a regional drug task force were serving a drug-related search warrant at the time.

After viewing the first snippet of video in the days after the shooting, Brown's family said the man was driving away and died from an unjustified "execution."

SEE ALSO: Brown's family calls on prosecutor to recuse himself

The office of Pasquotank County Sheriff Tommy Wooten II scheduled the Tuesday viewing following a judge's ruling on Thursday that said the family could view the footage within 10 days.

"It was my hope that we would be able to release the video publicly so everyone could see for themselves what happened," said Sheriff Tommy Wooten II in a video statement Tuesday night.

"We will continue to be transparent as the law allows as we await results from the independent investigation," said Chief Deputy Daniel Fogg in the same video statement.

Judge Jeffery Foster has said that he would not publicly release the footage because it could jeopardize the ongoing investigation into Brown's death or threaten the safety of people seen in the footage.

Foster said the video must remain out of public view for at least 30 days, but he would consider releasing it after that point if investigations are complete.

Fifty percent of the residents who live in Elizabeth City are Black but the county it sits in, Pasquotank County, is predominately white.

Brown's shooting has drawn national attention to the small, majority Black city in the state's rural northeastern corner. And many city residents - as well as nationally prominent civil rights leaders and attorneys - are demanding full release of the footage.