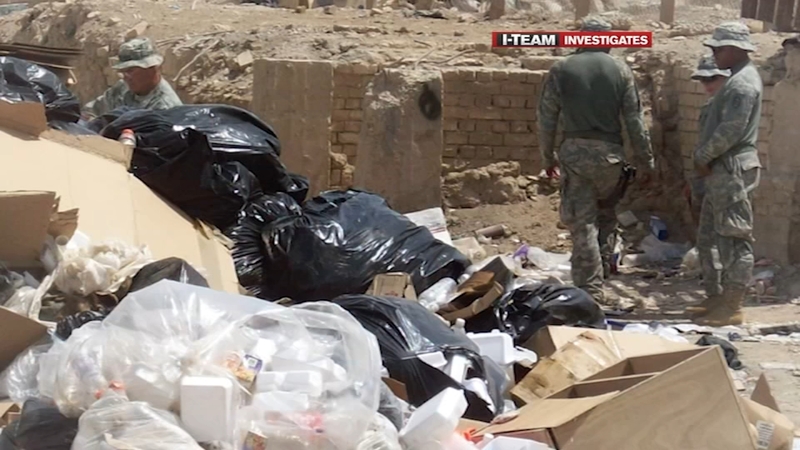 RALEIGH (WTVD) -- Thousands of American troops say they're in poor health due to an unexpected part of their service.

"I have a stomach issue now, but am I going to get cancer? Am I going to get emphysema?" North Carolina National Guardsman and veteran of Operation Iraqi Freedom Capt. Juan Zuluaga said. "It's a daily discomfort every time I eat."

Zuluaga links his ailments to working around burn pits: large canyons of trash set on fire as a way of disposing waste.

ABC11 spoke with several veterans for this report, and many described the burn pits as being as large as football fields.

As for what was being consumed in the pit, a U.S. Department of Veterans Affairs memo lists "chemicals, paint, medical and human waste, metal/aluminum cans, munitions and other unexploded ordnance, petroleum and lubricant products, plastics and Styrofoam, rubber, wood, and discarded food" as common items. The memo also warns that "burning waste in pits can create more hazards compared to controlled high-temperature burning-like in a commercial incinerator."

According to officials and soldiers on the ground, burn pits were to some degree a safer alternative to having Americans drive off post to dispose trash--which could leave them vulnerable to ambush attacks, land mines and improvised-explosive devices (IEDs).

"In the context of day to day living and operating in a combat environment and as a combat soldier, you don't think about it," Zuluaga says of the burn pit at Forward Operating Base St. Michael in Mahmudiya, south of Baghdad. "You deal with it. You suck it up and deal with it."

The captain and his comrades may have dealt with the smoke downrange, but an increasing number of Iraq and Afghanistan veterans have been reporting deteriorating conditions which they blame on their exposure to the fumes emanating from those burn pits.

In a survey published just this month, the Wounded Warriors Project reports 70% of respondents claimed they were exposed to "toxic substances or hazardous chemicals" during their military service.

At the request of the U.S. Department of Veteran's Affairs, the National Academies of Sciences, Engineering and Medicine conducted a wide-ranging study in 2011 to examine "long term health effects" related to burn pit exposure.

Though the authors lament "insufficient evidence" for "developing firm conclusions," they recommended further study and investigation, which in part led to the creation of the Airborne Hazards and Open Burn Pit Registry in 2014.

More than 19,000 veterans signed up in the first six months.

To date, 187,630 veterans and service members have completed questionnaires through the registry, including 10,148 in North Carolina - the fourth most among all states and U.S. territories.

Among those North Carolina vets participating in the survey was Ray Laird, another NC National Guardsman and a helicopter electrician deployed to Iraq in 2004. Laird died of pancreatic cancer in 2018 at the age of 40.

According to Laird's widow, Angie, the VA immediately encouraged Laird to sign up on the Registry when he first visited the doctor for skin irritation and sleep apnea.

"My husband got pancreatic cancer because of the burn pit exposure," Angie asserts to ABC11. "He has no family traits, no related cancers. He died at 40 from pancreatic cancer. That's very rare."

In addition to his service in the North Carolina National Guard, Lt. Ray Laird was a proud deputy in the Forsyth County Sheriff's Office.

At their home in Mocksville, Angie and her children, Billy and Natalie, love to flip through a large binder of letters and awards celebrating Ray's long career in law enforcement.

In another folder, Angie keeps all of Ray's medical records, including a letter from Dr. Kathleen Elliott, Ray's oncologist, concluding Ray's cancer was likely to have been caused by "prolonged exposure to the smoke and byproducts" of an open burn pit.

Behind the two page letter is another correspondence: a memo from the VA denying Ray's claim for disability benefits.

In the memo, dated November 20, 2017, the VA explains the denial of benefits as being due to the fact that "this condition neither occurred in nor was caused by service."

According to Angie Laird, Ray was treated at the Durham VA Medical Center, but the family had to raise $10,000 from the community and rely on other private insurance to help cover costs; and since Ray's death was not officially considered service-related, the Laird family was ineligible for any death benefits.

"I'm the sole provider for my two kids and me," Angie Laird said wiping away tears. "It's hard. I'm very, very angry at the way they've let down our family."

That includes Capt. Juan Zuluaga, who applied for disability benefits in 2011 and 2013 to treat his stomach issues and was also denied on the basis of lack of sufficient evidence.

Zuluaga applied for a third time this year and just this week the VA sent him a letter confirming coverage moving forward.

"The problem with (the VA) is I don't think they know what they're dealing with," Zuluaga said. "If they served in a combat zone in Iraq or Afghanistan, they've been exposed to this crap - treat them. That's it. It's not that complicated."

Though the number of claims are growing, VA officials report burn pit related claims have accounted for less than one-tenth of one percent of all VA claims processed.

Despite several overtures, VA administrators would not appear on camera, but a spokesman answered a series of questions in an email.

Among those questions - what's keeping the VA from approving many of these burn pit claims while at the same time encouraging veterans to come forward and participate in the Registry.

"(The) VA reviews claims on a case-by-case basis," spokesman Randal Noller writes. "However, generally, claims for service connection require an in-service event, a currently diagnosed disability or disease, and a link or "nexus" between the in-service event and the current diagnosis."

Noller adds that veterans have "several options" to seek reviews of decisions and to submit appeals: a supplemental claim, a higher-level review, or an appeal directly to the Board of Veterans' Appeals.

"VA is addressing Veterans concerns about the health effects of airborne hazards and burn pit exposure," VA Secretary Robert Wilkie proclaimed on July 26. "Establishing this program through the center is a testament to that and we will continue to collaborate with outside partners to ensure its ongoing success."

Additionally, Noller provided a list of dozens of ongoing studies underwritten by the VA and the Department of Defense.

That includes a study sponsored by Duke University at the Durham VA Medical Center.

(Researchers at the Durham VA agreed to speak with ABC11 on camera, but VA headquarters denied their participation at the last minute.)

Despite concerns, burn pits still in use

The Department of Defense and Department of Veterans Affairs may readily acknowledge the potential dangers of burn pits, an April 2019 report to Congress shows they are still being used, though primarily in Syria (updated information is not available since the U.S. withdrawal).

"The disposal of hazardous waste, medical waste, tires or plastics in open burn pits during contingency operations can emit harmful smoke or fumes and is therefore strictly prohibited," Under Secretary of Defense for Acquisition and Sustainment (A&S) Ellen M. Lord writes, but acknowledges that burn pits could still be used if "no feasible alternative exists."