RALEIGH (WTVD) -- The City of Raleigh hosts about 250 events every year and 180 of those are in the downtown area. That's 180 times roads close and traffic is diverted.

That's been a source of frustration for some businesses owners who say the road closures block customers. Last week, we reported on the case of Benjamin Shelton who opened the Gringo A Go Go restaurant on the corner of Edenton and Person streets two years ago.

He's so angry about the closures that he put a sign out in front of the restaurant reading "HEY RALEIGH! Stop closing my intersection constantly. YOU'RE KILLING MY BUSINESS."

Shelton says another event this weekend will once again close the intersection in front of his restaurant.

"And I get zero business, zero," he said.

He told ABC11 he believes the city doesn't think about his fledgling business when it plans events and closes the road. When he complained to the city attorney, he says he was told he just has to deal with it.

"We want to find that balance between those who are coming to downtown now and those events that helped revitalize downtown to begin with," he explained.

With 250 events in Raleigh like road races, parades, demonstrations, and block parties, he and two staffers try to make sure events run smoothly and neighborhoods aren't adversely affected.

"We don't want to affect someone every other day or every other weekend. We try to spread it out, not just across the city, but time-wise as well," he said.

But Shelton and some other business owners around downtown say the city needs to change race routes more and close fewer streets.

"After every single event we talk to the police officers that worked that event. We have our own staff out there evaluating. We look at the impacts and try to adjust them year after year," said Remer.

"They don't remember that someone else closed the intersection down. All they remember is they have a hard time getting here, let's go somewhere else," he offered.

Remer says the city will start moving events to the warehouse district to spread things out more. But Raleigh spent millions to make Fayetteville Street and City Plaza a pedestrian friendly place and it wants to take advantage of that for events. 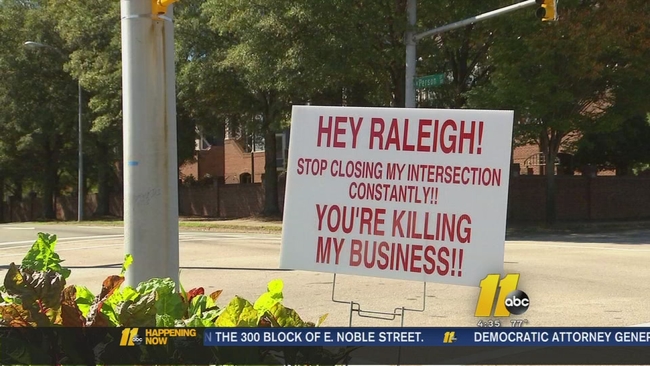