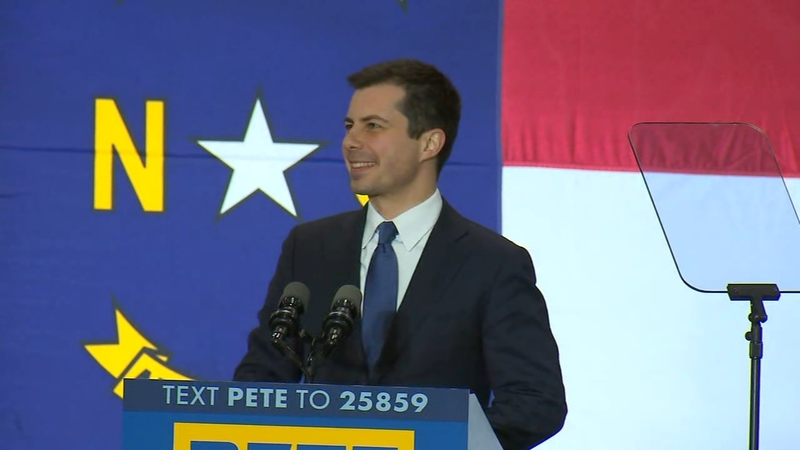 RALEIGH (WTVD) -- A day after speaking in Raleigh, Democratic nominee Pete Buttigieg suspended his campaign for president. The below story was written and published before Buttigieg announced his withdrawal from the race.

Buttigieg spoke in front of an energized crowd Saturday night at Broughton High School in an attempt to spark some momentum ahead of Super Tuesday.

The 38-year-old upstart Mayor of South Bend, Indiana, Buttigieg charged forward with his campaign that featured a stop in Nashville before coming to North Carolina later in the day. At Broughton's gymnasium, "Mayor Pete" proposed a call for unity in an effort to continue building a diverse following.

"Americans are watching as the cost of housing and healthcare rises while wages can't keep pace," Buttigieg said. "With so much at stake, we must be prepared to meet these challenges of the future. Americans are crying out for a new kind of leadership, hungry to be united in a common purpose. We know that if we are to tackle these challenges, we have to come together to write a new story for our future."

Buttigieg didn't get the result he hoped in South Carolina, with no delegates and 11 percent of the vote.

Buttigieg had previously spoken at Greenleaf Christian Church in Goldsboro in December. He spoke with ABC11's Jonah Kaplan in Charleston, S.C. earlier in the week, saying he was 'concerned' over Sen. Bernie Sanders' message "that's really about rejecting anybody who doesn't agree 100 percent of the time."