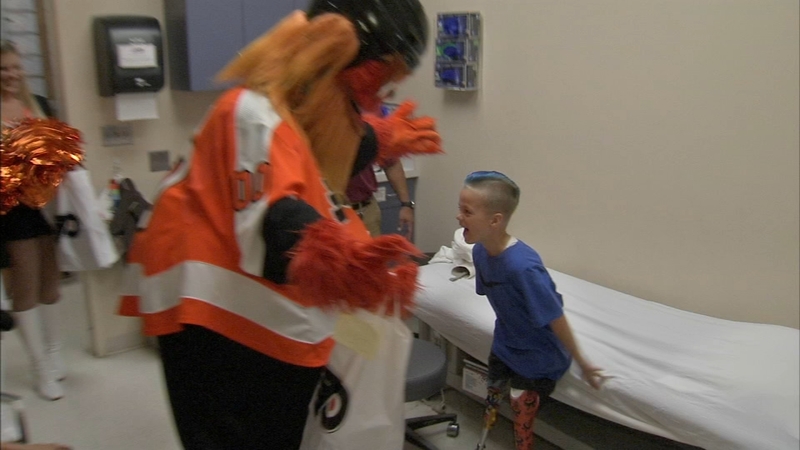 PHILADELPHIA -- On Tuesday morning, Caiden O'Rourke did what he's done every year of his life at Shriner's Hospital for Children Philadelphia.

The young boy from Abington, Pennsylvania, got fitted with a prosthetic leg that he customizes with designs featuring his favorite sports teams.

"We wanted him to be proud of them so we let him go to the store and pick out different fabrics and all kinds of things," Caiden's mother Katie O'Rourke said.

"He went bungee jumping from the top of the ceiling and then he fell on the ice. He's not afraid of anything," Caiden said.

The 8-year-old was born with a rare orthopedic condition that prevented his leg from fully forming.

And though these annual hospital visits with his mom and two older brothers are routine, this day was anything but.

Caiden had no idea that he was in for quite the surprise.

The Philadelphia Flyers heard of the young Gritty groupie and had the famous mascot pay him a visit.
EMBED More News Videos

7-year-old Caiden O'Rourke received a custom Gritty themed prosthetic leg and a surprise visit from the Flyers mascot himself.

Not one to be at a loss for words, the third grader was speechless when the big orange guy walked in.

And the Flyers swag was serious: from a hockey puck, to a bobble head, to a custom made jersey that he may never take off.

At first glance you'd think the two may not have much in common, but mom Katie says there's a reason little Caiden feels such a connection to Gritty.

"He thinks Gritty is crazy and he loves everything about that because he's crazy and not afraid of things," Caiden said.