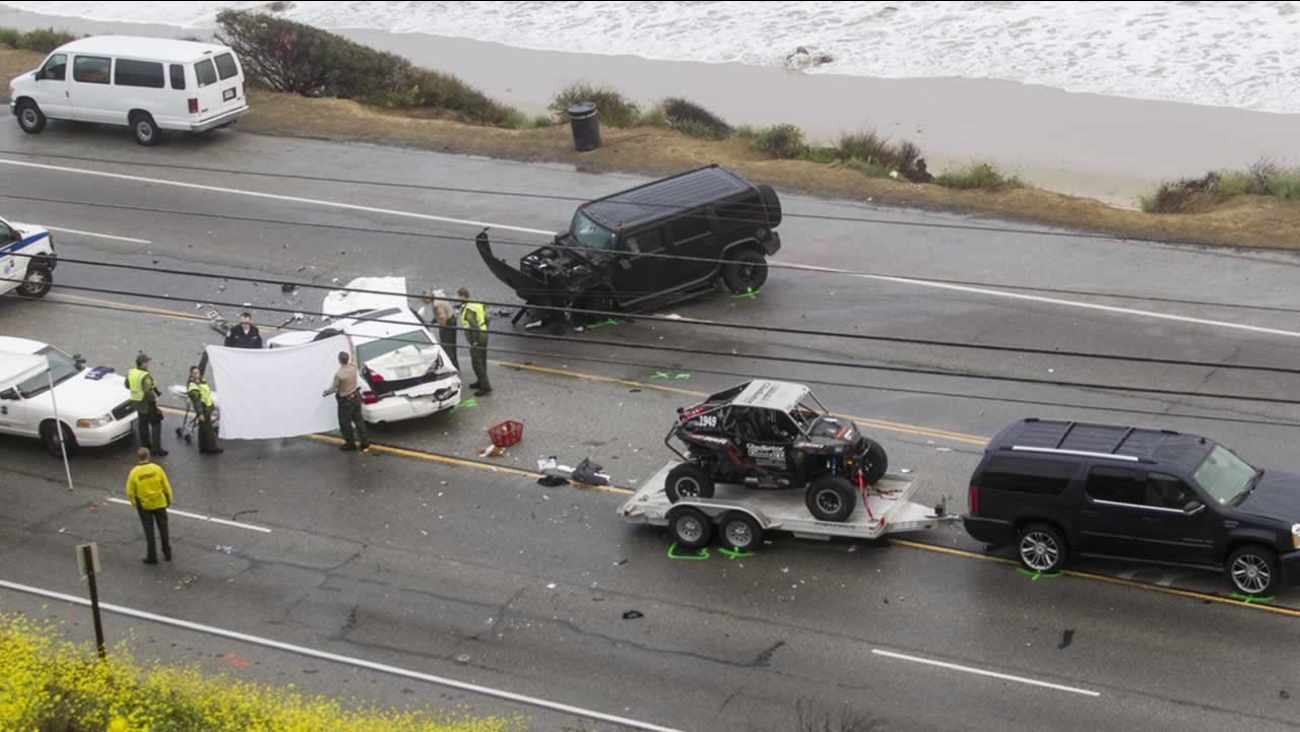 The Los Angeles Coroner is assisted by law enforcement officers to remove the body of a victim of a car crash where one person was killed and at least seven other injured. (AP Photo/Ringo H.W. Chiu)

LOS ANGELES -- Prosecutors declined to charge Caitlyn Jenner on Wednesday in a California car crash that led to the death of another driver, saying there was not enough evidence for a conviction.

Authorities said Jenner was towing an off-road vehicle on a trailer behind a Cadillac Escalade on Feb. 7 when she crashed into two cars, pushing one into oncoming traffic. Driver Kim Howe was killed when her Lexus was hit by a Hummer.

"We believed from the start that a thorough and objective investigation would clear Caitlyn of any criminal wrongdoing," said Blair Berk, Jenner's attorney. "We are heartened the district attorney has agreed that even a misdemeanor charge would be inappropriate. A traffic accident, however devastating and heartbreaking when a life is lost, is not necessarily a criminal matter."

The accident occurred before Jenner announced she is transgender and transitioned into her new identity as Caitlyn.

Sheriff's investigators previously determined that Jenner, 65, was traveling at an unsafe speed for the road conditions at the time and there was enough evidence to support a vehicular manslaughter charge. The case was then referred to the district attorney's major crimes division.

After the accident, Jenner released a statement expressing sympathy to everyone involved in the accident.

"It is a devastating tragedy," the statement read. "I cannot pretend to imagine what this family is going through at this time. I am praying for them."

Jenner is facing separate lawsuits by Howe's stepchildren and the driver of the other car involved in the collision. Jenner's lawyers are fighting efforts to have her give sworn testimony in a deposition in the wrongful death suit filed by the stepchildren.

The crash has shadowed Jenner's much-lauded transgender transition that was announced in a two-hour television special with Diane Sawyer. A Vanity Fair cover story revealed her new identity, and a reality series "I Am Cait" chronicled her new life.

In July, Jenner accepted the Arthur Ashe Courage Award at the ESPYs sports achievement event and urged fellow athletes to join her and make advocacy for transgender issues a priority.

A Los Angeles judge approved Jenner's petition to formally change her name and gender on Sept. 25. Jenner was born Bruce Jenner and won an Olympic gold medal for the decathlon in 1976.

Jenner was married to Kardashian matriarch Kris Jenner for more than 20 years and frequently appeared on "Keeping Up With the Kardashians." The couple had two children together, and Jenner has four children from previous marriages.