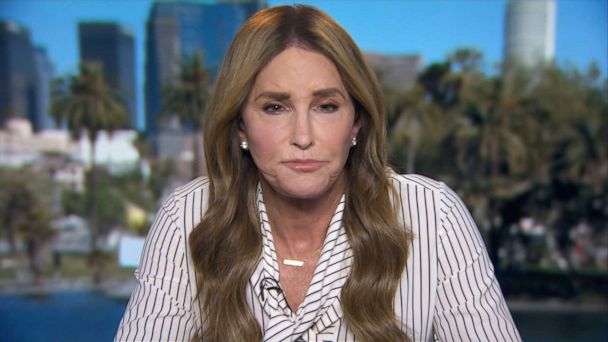 Caitlyn Jenner, who is running to replace California Gov. Gavin Newsom in a recall election, branded herself as a political outsider Thursday on ABC's "The View."

Jenner, a transgender woman, has been a prominent candidate in the recall race since announcing her intention to run in April. An outspoken defender of former President Donald Trump during his tenure, she has drawn the ire of many trans activists for her viewpoints, including her position that trans athletes should not be allowed to participate in girls' sports.


On "The View," co-host Sara Haines asked her about the pushback she's received on the issue, but Jenner quickly pivoted to her stance on immigration.

"To be honest with you, it's a very small issue in the state of California. I have been very outspoken on this, you can go to my website CaitlynJenner.com, I explain everything," she said. "But we have so much -- so many bigger issues in this state, like immigration. Right now we have a huge immigration issue in the state. As governor, I would first close the southern border. I would on all state lands, finish the border -- the border wall."

This is the sixth official attempt to recall Newsom, a Democrat, since he took office in 2019. But it's the first attempt to gain traction with voters. Although organizers for the recall effort claim to be nonpartisan, Republicans have rallied around it -- and the Republican Governors Association launched a political action committee to help fundraise for it.

Supporters of the recall effort have said government overreach has led to dissatisfaction with Newsom's leadership. They have cited his executive order to phase out gasoline-powered cars by 2035 and rolling power outages to prevent wildfires, among other issues. They have also pointed to a number of issues surrounding his handling of the coronavirus.

Jenner highlighted what she calls Newsom's hypocrisy on Thursday.

Newsom's campaign did not immediately reply to a request for comment but the campaign website says he's "standing up for California's values."

"Gavin has been on the leading edge of change, enacting bold reforms that reflect those values - jumpstarting the marriage equality movement, passing universal healthcare and universal pre-k, and advancing first-in-the-nation gun safety and criminal justice reforms," it says. "He believes that California has a responsibility and opportunity to show the country and the world what inclusive, progressive government can achieve."


The first attempt to recall Newsom came two months after he took office and was filed alongside recall attempts taking aim at six other top Democratic officials, including the lieutenant governor, secretary of state and attorney general.

Newsom said in an April interview on "The View" that supporters of the recall effort are associated with some far-right groups.

On Thursday, co-host Joy Behar asked Jenner why she is pursuing the state's highest elected position when she has not ever held elected office.

"First of all, I am an outsider. I get that. We are in a state that is controlled by the Gavin Newsom's of the world, and things have to change. And being an outsider, I think is a good thing," she said. "I know it's a tough road, as a Republican to win in the bluest of blue states, but I'm not your average Republican."

In California, Democrats outnumber Republicans by a nearly 2-to-1 margin, and it could be difficult for a former Trump supporter to find a path. Jenner said she voted for Trump in 2016 before revoking her support in a 2018 op-ed published in The Washington Post over him "relentlessly" attacking the trans community.

But Jenner has built her campaign with the support of Brad Parscale, Trump's former campaign manager. She told co-host Sunny Hostin that she was focused on surrounding herself with the "best group of people."


"I was able to hire some of the best people out there to join the campaign," she said. "And honestly I think I've gotten very, very good advice. They know this arena, they know what's going on. And so I don't make any excuses for anybody. But I feel like I have a good team around me that can lead me to victory."

Jenner did not clear up one point of controversy surrounding her political history. After telling CNN that she did not vote in 2020, a record of her voting history obtained by ABC News from the Los Angeles County registrar shows otherwise.

"In the last 20 years you did not vote in two-thirds of elections," co-host Sunny Hostin told Jenner. "So you haven't really been engaged in the civic process, why should, why should California voters believe in you?"

Despite the opening, Jenner did not address her voting history.

"I'm the best person for the job. I am a common sense person. I also attract a lot of good people. And I would do everything for the people of this state. Gavin Newsom has done nothing but do things for the special interests. And it's wrong, and the people have heard, and that's why he's in a recall right now because he's done such a terrible job," she said.

Behar also asked Jenner if she believes that former Trump won the 2020 election, something many Republicans across the country still question as they pursue post-election reviews to "audit" election results despite multiple recounts or audits that have resulted in the same outcome showing Trump lost.

"I'm not going to get into that. That election is over with. I think Donald Trump did some good things and what I liked about Donald Trump is he was listening, but he was, he was a disrupter when he was president, I want to do the same thing. I want to go in and be a thoughtful disrupter in Sacramento," she said in response.
Report a correction or typo
Related topics:
abc newsnational
Copyright © 2021 ABC News Internet Ventures.
TOP STORIES
3 dead, 2 missing as tubers go over dam near NC-VA border
LATEST: Gov. Cooper urges more people to get vaccinated
UNC student body president slams his own university
Tropical Storm Claudette expected to form today
Restaurants begin dishing out 20 percent Living Wage Fee to customers
100-mile yard sale happening in central NC this weekend
US Mint to issue quarters honoring notable American women
Show More
2 dead, 2 injured in Durham shooting, police say
Pilot killed when airplane crashes in Kinston
Cheer squad criticized for excluding student with Down syndrome from team photo
Alaska hiker found alive after reported missing and chased by bears
Golf marathon at UNC raising money for Folds of Honor
More TOP STORIES News