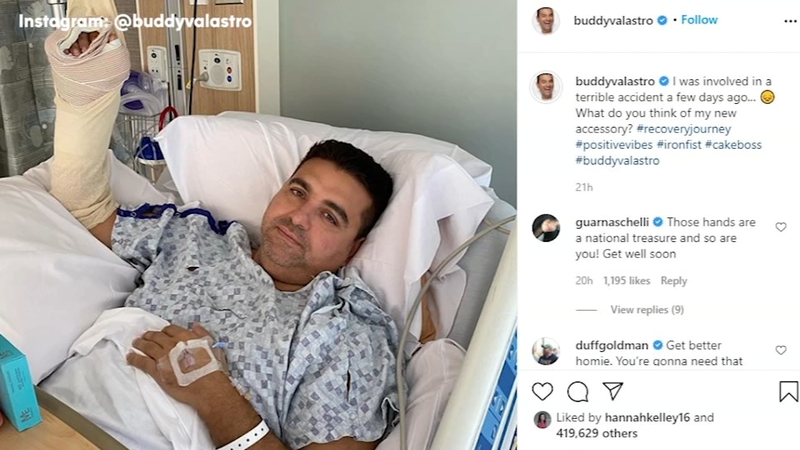 "Cake Boss" star Buddy Valastro is recovering from what he called a "terrible accident" at his New Jersey home.

Valastro posted a photo of himself with an arm cast lying in a hospital bed Wednesday with the caption, "What do you think of my new accessory?"

The Cake Boss star injured his dominant right hand in an accident in his home bowling alley, according to a representative for Valastro.

He reportedly was trying a DIY repair on a bowling pin mechanism when his hand got impaled inside the machinery.

"After trying to release the bowling pin from the cage mechanism, his right hand became lodged and compressed inside the unit," a representative for Valastro told PEOPLE Magazine. "Unable to remove his hand, he can see a 1-1/2" metal rod slowly and repeatedly impale his hand three times between his ring finger and middle finger."

After several minutes stuck, Valastro's teenage sons had to use a reciprocating saw to cut through the metal rod in the machine.

Valastro has had two surgeries on his hand and was reportedly released from the hospital Wednesday.

Valastro's representative said he faces a long road of rehabilitation and recovery.