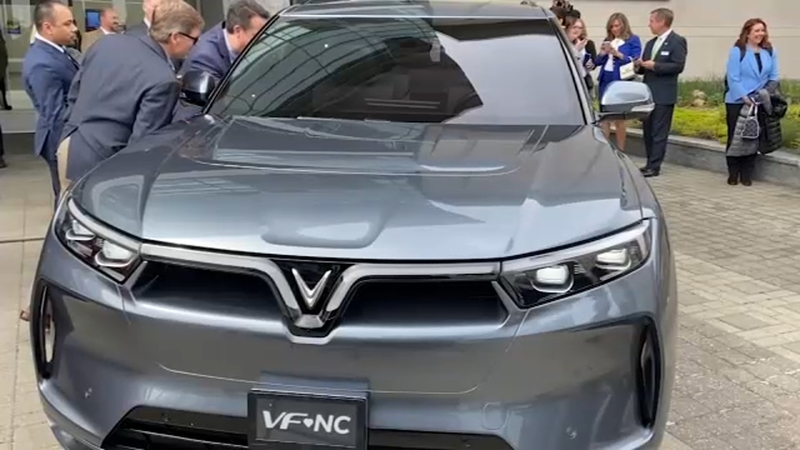 "It's an exciting day for North Carolina," Cooper said on Tuesday. "Our first car manufacturing plant."

The state has tried and failed for years to attract car manufacturers. Leaders on Tuesday said this development won't just be a win for the economy but also for the environment.

"It happens to be electric vehicles which leads right into where NC needs to go on clean energy and clean transportation so we're very excited about this and all the good-paying jobs it will create," Cooper said.

VinFast is an electric vehicle startup that officially launched in Vietnam in 2019. This year the company plans to expand into the U.S., Canada, and Europe. Last fall the company chose Los Angeles for its headquarters. Chatham County beat 12 other states and 29 potential sites.

The company plans to invest $4 billion to start a plant at Moncure's Triangle Innovation Point in Sanford. The operation is set to add at least 7,500 jobs. Production for electric cars and batteries is expected to start in 2024 and the plant will eventually produce 2,000 cars a year.

Tuesday's announcement nearly doubles the number of new jobs already announced in 2022 across the state.

"We're going to be creating thousands of jobs for Chatham County residents who have largely had to travel significant distances to find good-paying jobs and this is going to change," said Karen Howard, the chair of Chatham County's Board of Commissioners.

"Knowing the hub that Chatham once was for manufacturing and to see us go full circle, you have no idea how exciting this is," Reives said.

Other state leaders said Tuesday's announcement is just another example of how North Carolina is redefining itself and attracting high-tech and high-skill manufacturers.

North Carolina hit records in new investments ($10.1 million) and new jobs announced (24K) in 2021. VinFast's investment is nearly half of all the investments announced in 2021 and will create a third of the jobs.

VinFast comes after the state announced two major wins in Toyota and Boom, the supersonic jet startup, in the last four months.

During the past year, more than a dozen major companies have announced plans to build and expand in the Tarheel State. From Apple to Google to Fidelity Investments, around 20,444 jobs are expected to be created over the next few years. The state is expecting to grow its economy by more than $209 billion dollars over the next few decades with the arrival of 15 major businesses announced in the last year.

President Joe Biden even issued a statement on the announcement connecting the investment to national efforts to revitalize domestic manufacturing.

"Our efforts to build a clean energy economy are driving companies to make more in America rebuild our supply chains here at home, and ultimately bring down costs for the American people," Biden said in a written statement.

VinFast is predicted to add around $71 billion to North Carolina's GDP by 2030.

The economic impact could be even greater. A University of South Carolina study found the BMW plant in Spartanburg County generated $16.6 billion a year and supported nearly 31,000 jobs after two decades.