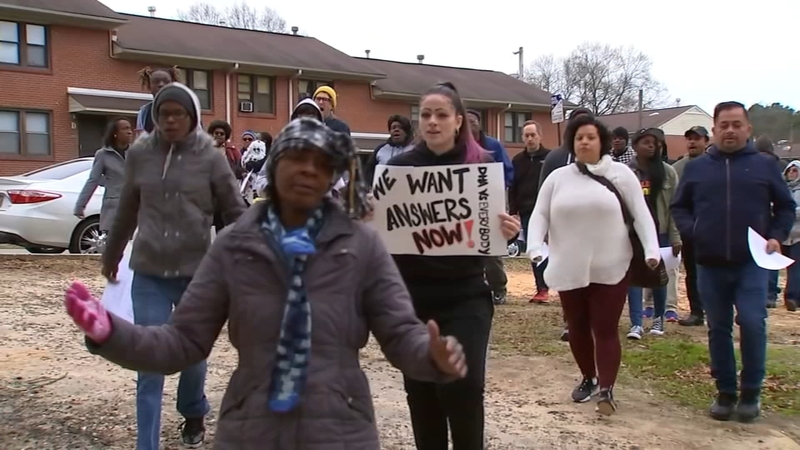 DURHAM, N.C. (WTVD) -- In a tense meeting, residents of McDougald Terrace aired their concerns and frustrations to the Durham Housing Authority on Thursday.

Angry residents also pressed officials about the deaths of two babies at McDougald Terrace -- one child died Nov. 20; the other on Dec. 8. Durham's Assistant EMS Chief Lee Van Vleet told them that until autopsy reports come back, they cannot rule out the possibility the babies were poisoned by carbon monoxide.

Because so many people took to the podium at Burton Magnet Elementary School, it was a long meeting, lasting more than two hours.

Residents voiced their concerns about carbon monoxide as well as rats, mold and the need for critical repairs.

They called on the DHA to step it up.


"We feel like it's a complete mismanagement of the properties out here," One resident said. "We don't feel like they would want their children living in these circumstances."

Nearly two dozen people marched from the playground to the podium to make their voices heard about the dangerous carbon monoxide scares.

"I'm scared because I have two other kids and I don't even sleep at night," one woman said.

A male resident told officials: "We're not asking for no handouts, we're asking to survive."

Residents line up in the aisle to speak and ask their questions to DHA, Durham Fire and EMS. #abc11 pic.twitter.com/GuXbou7whY

McDougald Terrace residents rallied and marched into this afternoon’s meeting with DHA demanding more accountability and better living conditions. This comes after several carbon monoxide scares and concerns over the past week #abc11 pic.twitter.com/nGECmjSNlE

Four people had elevated levels of carbon monoxide, while six elevated readings were detected. In the email, the Durham fire chief noted that he saw first-hand that residents used stoves to heat their homes -- a huge CO no-no. One resident said she felt she had no choice.

"I called because my pilot was out, I called, I want to say somewhere in November to tell them my pilot was out," the woman told DHA. "I have kids. I'm not going to let them freeze to death because somebody can't come today. It took about three or four days, and I had to use my oven because it was cold."

Here are the results of the three day inspection by the Carbon Monoxide task headed up by DHA. #abc11 pic.twitter.com/V0Cz98B1ai

The meeting, slated for just an hour, went on for nearly two as residents lined up to lean into DHA. Though many were concerned about carbon monoxide, others were simply worried about surviving.

"We live in the projects, but we're humans, too," one woman said.

"We're dealing with an infrastructure that is outdated," added another resident.

Federal and state authorities are looking into the situation. For residents, Thursday's meeting won't be the last. DHA has agreed to meet with them weekly to address concerns.