Canes' new practice facility has low-key opening, thanks to pandemic 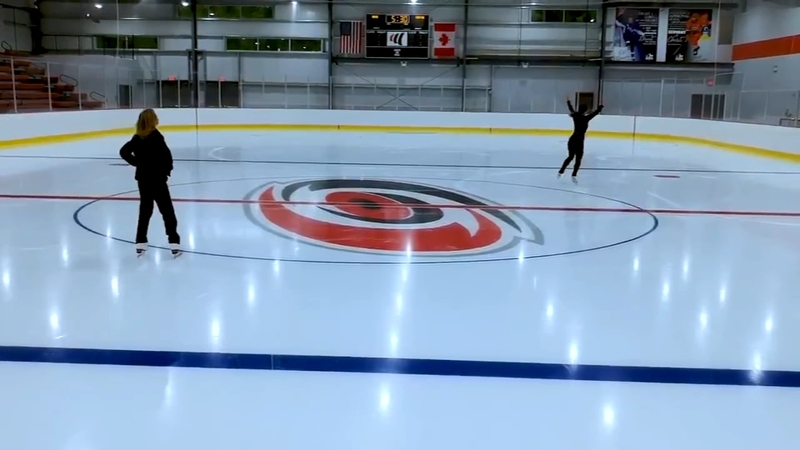 RALEIGH, N.C. (WTVD) -- After years in the making, the Carolina Hurricanes finally have a new practice facility. The Wake Competition Center is complete but because of COVID-19, the first skate looked a bit different.

"We're excited about it," said Don Waddell, general manager of the Canes. "Obviously we had the timing set for what would've been a normal training camp in September for this upcoming year, but obviously with the virus we know that's not going to happen, so we will be up and ready whenever that time comes."

It's not the opening the Canes expected, but the COVID-19 pandemic has changed many plans.

"It's definitely not something we anticipated," said Michael Baxter, the general manager of the Wake Competition Center. "It is what it is. This is years in the making and the hope is that this is something that us as a country and us as a community is able to get past. When we can get past it, we have this facility that is here and ready to accommodate everything that we did in the past."

Baxter said that opening during a pandemic is bittersweet but that shouldn't take away from the opportunities the development can bring.

"The plan wasn't for this thing to be a big splash for the first six months," he said. "It's supposed to be here for the long haul and it will be a wonderful addition to the community for everything that we are going to do moving forward. It's a much larger part of a larger plan."

There's no denying Raleigh has become in many ways, a hockey town.

"Hockey is alive," Waddell said. "We're just not playing hockey at PNC arena in Raleigh. We just actually have had a great week this week with our sale staff selling season memberships.

"People are excited about hockey being back, especially when you win, it helps," he added. "We know we are going to play hockey in Raleigh at some point. It's just we're not sure when it's going to happen. There is going to be a solution or a vaccine and we will get back to whatever the new norm is. "

Right now, the Wake Competition Center is extremely limited, with only some youth hockey and figure-skating camps. There are no spectators and everyone who enters the building is health-screened.

"The hockey community, the figure-skating community, they are a die-hard community," Baxter said. "There are people that are here a multiple times a week, so when you go a couple of months and nobody can do anything, that's hard for a lot of people; this is a part of their daily lives."

As with other aspects of life during a pandemic, patience is required.

"At some point there will be hockey back in Raleigh," Waddell said. "We will be able to do something and get our fans out there to show off the facility. You wish this whole country, we were in a different spot, but we're not, and we have to deal with it. We're in the playoffs now, and we're worried about that. When we get back to Raleigh, we will worry about doing a grand opening."
Report a correction or typo
Related topics:
sportsraleighfigure skatinghockeycarolina hurricanes
Copyright © 2022 WTVD-TV. All Rights Reserved.
TOP STORIES
Snow, then icy conditions as winter storm moves over central NC
Roads began to deteriorate as snow, ice accumulate
Delta flight slides off runway after landing at RDU
City, county governments close services as wintry weather hits NC
LATEST: Deadline extended for House Wake COVID relief program
Raleigh Police investigate after man shot
Ford recalls 200K cars because brake lights can stay on
Show More
Laundrie claimed responsibility for Petito's death in notebook: FBI
US confirmed 1st COVID case 2 years ago today
Louie Anderson, Emmy-winning comedian, dies at 68
How to drive on snow, ice and get out of a skid
Raeford man killed in Fayetteville motorcyclist crash
More TOP STORIES News