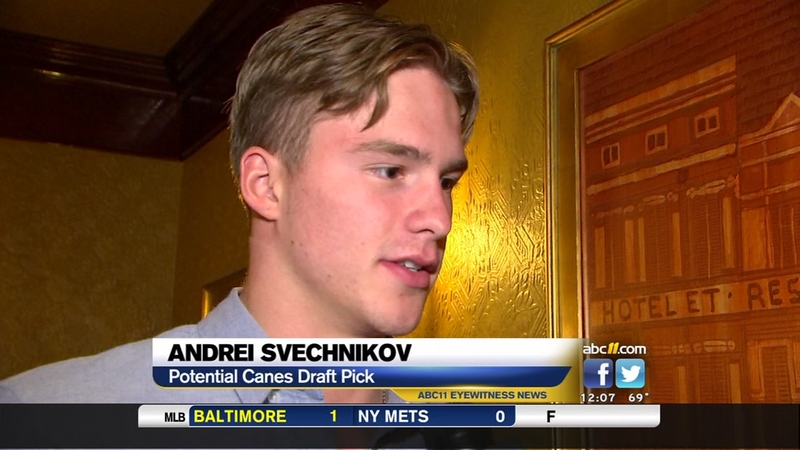 RALEIGH, NC (WTVD) -- Things keep looking better and better for the Carolina Hurricanes - new owner, general manager, head coach, and this month, they have the second pick in the NHL Draft on June 22.

On Wednesday night, we caught up with Carolina Hurricanes General Manager Don Waddell and the team's top prospect for the 2018 NHL Draft, Andrei Svechnikov.

Most 18-year-olds have college on their minds but Svechnikov is trying to impress the Canes GM.

Coming up on #ABC11 our exclusive conversation with Don Waddell and @NHLCanes top prospect for the #NHLDraft Andrei Svechnikov pic.twitter.com/TPOUyHquVH

"I just don't feel any pressure," he said. "I just want to play next season here."

"These kinds of players don't come along that often," Waddell said. "That's why you have to be careful thinking about can we do better in the draft if we do something else. He's a special player and he could make a big impact and be a part of this progress as we move forward for a long time."

The Canes met Svechnikov at the NHL combine and then brought him to Raleigh to learn more about him as a person.

"Very knowledgeable about what's going on around our team," Waddell said. "He did a lot of homework. Knows all about our players and all of that so it's been a lot of fun with him."

"You can see the fire in his eyes when he talks about it," Waddell said. "He talks about winning. We all look at him as an individual player, how many goals he wants to score but no he wants to talk about how many games we are going to win."

.@BridgetABC11 and I caught up with Canes General Manager Don Waddell and the Canes likely Number 2 pick of the NHL Draft Andrei Svechnikov. #CarolinaHurricanes #ABC11 pic.twitter.com/RxzCzafofx

"I want to win so bad and that's what the team needs - just win," Svechnikov said.