Hurricanes' Brind'Amour gets extension, named NHL coach of the year 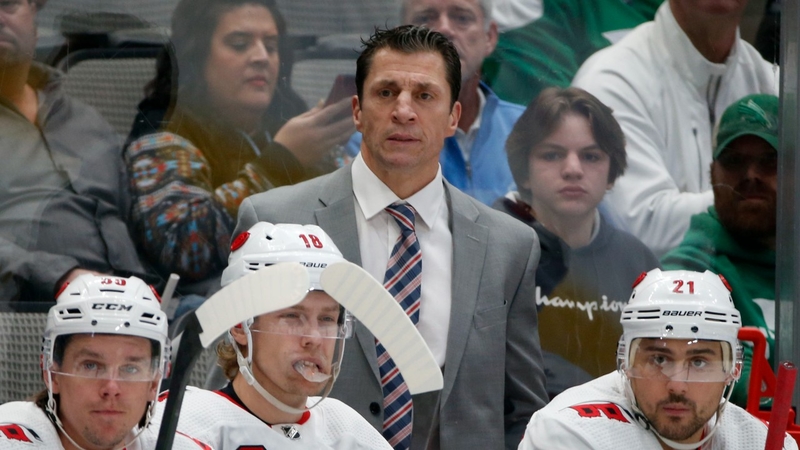 RALEIGH, N.C. (WTVD) -- Since taking over as the Carolina Hurricanes head coach in 2018 Rod Brind'Amour has led Carolina to three-consecutive playoff appearances, became a finalist for coach of the year and just earned himself a three-year contract extension.

And to top it off, the National Hockey League announced Thursday evening that Brind'Amour has won the 2020-21 Jack Adams Award as the NHL's coach of the year. Brind'Amour is the first Whalers/Hurricanes head coach to receive the honor.

This most recent season his team finished the regular season with the second best record in the league.

"We truly believe we are headed in the right direction," said Carolina Hurricanes General Manager Don Waddell. "We're very happy to get Rod signed to a long-term deal and look forward to the next steps."

Brind'Amour, 50, was named Hurricanes head coach on May 8, 2018, and in his first three seasons behind the bench, he has led the team to a 120-66-20 record. His .631 points percentage is the highest by a head coach in franchise history.

There was little doubt that Brind'Amour would get an extension this offseason, and after signing the extension he said there was never a thought in his mind that he would leave Carolina.

"There's always temptation to listen to the outside noise...but I said when I sat here with Don three years ago...this is a part of me. I've been here forever."

Rod Brind'Amour says it's about the people more than anything and says it never entered his mind that he would leave.

Brind'Amour- who led the Hurricanes to their fifth divisional title this season says there's always temptation to listen to the outside noise but he was confident a deal would get done for him to stay in Carolina.

"I would have a hard time thinking I could do the same job I'm doing here somewhere else because this is a part of me," he said. "I've been here forever and again it's more about the people that I get to come to work with every day and that wouldn't be the case somewhere else."

While the exact details of Brind'Amour's contract have not been released the 50-year-od coach says he's happy with the deal and that the end of the year meetings with his players solidified what this is all about.

Waddell credited Brind'Amour with turning around the Canes.

"Rod has been the driving force behind the culture change we've undergone here," Waddell said. "He keeps our players motivated, demands accountability, and has our team ready to compete every night. He has truly raised the bar for our organization, and we're thrilled to have him continue as our coach for years to come."

Brind'Amour is a former player for the Hurricanes, captaining the team to its only Stanley Cup championship in 2006.

He retired as a player in 2010 after more than 20 season in the league. As a coach, he has a record of 120-66-20. He's the only coach to lead the Hurricanes to the playoffs in three consecutive years.

"As we're focused on trying to be the best team we can be we've got a lot of work to do this summer getting ready for this year and a lot of planning," Waddell said. "Rod has stated very clearly that he wants to be a Hurricane so one way or another I'm assuming it'll work out for not only today but for the future."

While the exact details of Brind'Amour's contract have not been released the 50-year-od coach says he's happy with the deal and that the end of the year meetings with his players solidified what this is all about.

"I feel like I'm the richest coach in the league because I have a relationship with my owner and my GM," Brind'Amour said. "I don't know if a lot of coaches can have to have an influence on who they're picking up and who they're trying to keep. I don't know how many coaches can do their job where they live and where they're from and had a footprint on everything that's gone on here over the last 20 years."