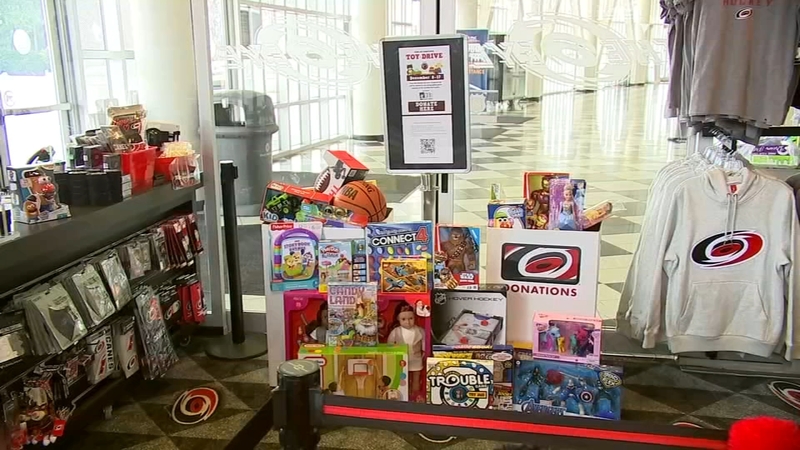 RALEIGH, N.C. (WTVD) -- It's been 10 months since fans saw live action inside PNC arena but the Carolina Hurricanes are making sure the community continues to feel the team's support.

From now through Dec. 17, the Canes are hosting a toy drive at the team store to benefit the Durham Children's Initiative.

"We felt it was very important to provide an opportunity...to these kids that otherwise might not have any Christmas presents under the tree," said General Manager of the Carolina Hurricanes, Don Waddell. "This is another avenue that our fans can connect with the organization. We're not successful without the community support; we recognize that. We definitely want to be a part of this community."

Waddell said this is the first December since going pro in 1980 that he wasn't involved in hockey in one way or another.

"It is different," he said. "The good thing is things look like they're getting into a better direction as far as potential start dates."

There's still no official word from the NHL on when and how the 2021 season will start but the league has been working with the players association and Waddell says January 13 is the new target date for the season to start, which could include a realignment of the divisions.

"The part with the union has been satisfied from what I understand," he added. "Now, we've got to deal with what we've been dealing with the last 8 months and that's COVID. There's certain cities and places that can't host games at all so those are things the league has got to work through with the NHLPA."

Waddell said if the league decides that each team will play in their home city he feels confident that the Hurricanes will be able to host games at PNC Arena - starting without fans.

"We don't want to put anybody at risk whether it's a player, coach, employee of the organization or a fan or anybody," said Waddell. "That's not the purpose of this. Hockey is secondary to somebody's health. Saying that we do feel like we proved last year when we started up, even when we were here in Raleigh and then continued into the bubble in Toronto, that if you have the right protocols set up that you can do these things and do them safely. We spent a lot of time and a lot of money preparing for whenever this potential day could happen."

Waddell also added that when the time comes to play he believes coach Rod Brind'Amour and the team will be ready to go.

"We've been working on this for a while now because we knew, we felt we were going to be playing at some point. No doubt our coaches are ready to roll now. When we open training camp, whatever date that is I know Rod and his team will be fully prepared. I know our players will be. The other good thing is a lot of our players are back in town now with our new facility out in Morrisville being able to train with Bill Burniston our strength and conditioning coach. I think conditioning won't we a factor. One thing is every team is dealing with the same thing, there's no advantages or disadvantages. The advantage I know we have is our coaching staff definitely will be well prepared."
Report a correction or typo
Related topics:
sportsraleighcarolina hurricanestoy drivefundraiser
Copyright © 2022 WTVD-TV. All Rights Reserved.
TOP STORIES
Winter storm impacts reduced, shifted east
Voting bill collapses, Democrats unable to change filibuster
'We can't get any more': Stores struggle to restock shelves
Suspect captured in killing of woman, 24, working at furniture store
Third arrest made in Black Friday shooting at Streets at Southpoint
Daniel Turcios shot 5 times after crash on I-440, RPD reports
NC legislature votes to further delay primaries until June 7
Show More
'He was special': Durham friends remember Andre Leon Talley
Cumberland County mom spins way to $500,000 lottery prize
Victim in fatal I-85 crash was just 3 months old
19-year-old military driver charged in wreck that left 2 Marines dead
Earnhardt Jr. to be inducted into NASCAR Hall of Fame
More TOP STORIES News