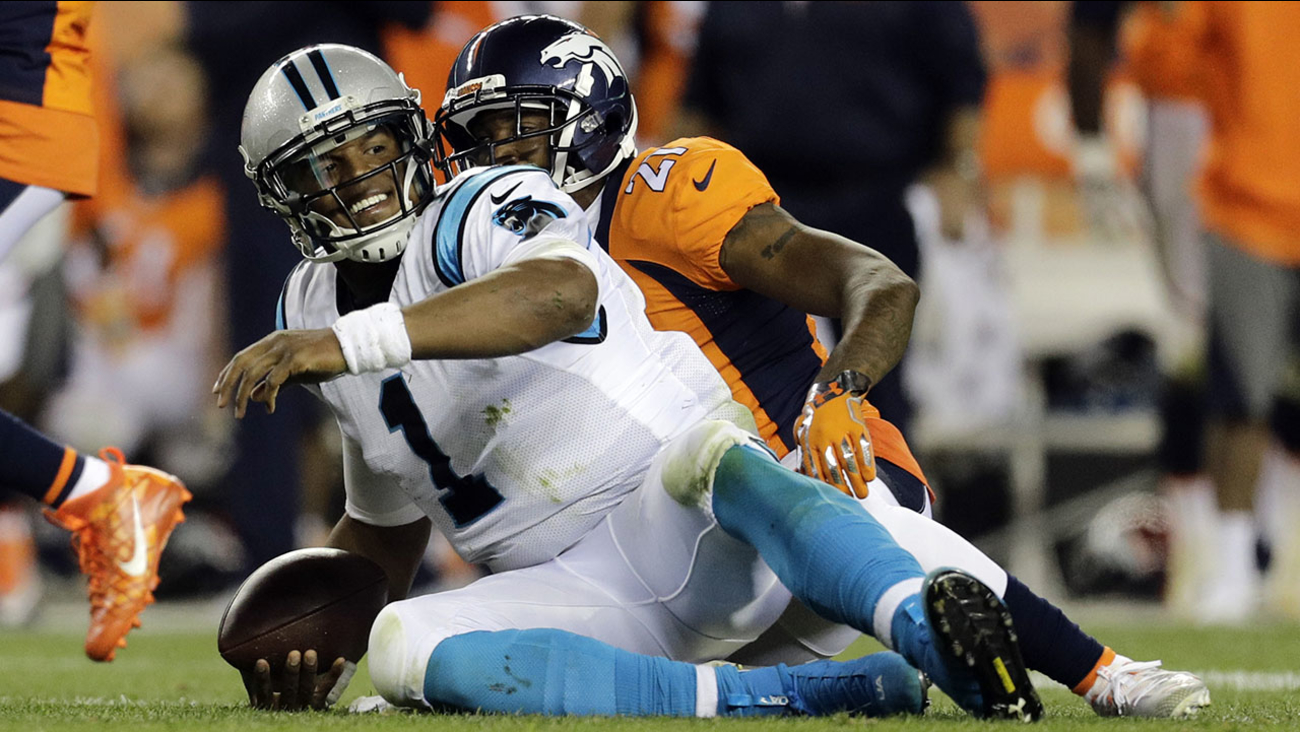 DENVER (WTVD) -- Cam Newton's latest encounter with the Broncos must've felt like another trip to the dentist.

The Panthers quarterback added yet another move to his repertoire - he actually flossed his teeth on the sideline - but his rematch with the Broncos in Thursday night's season opener was a brutal affair that ended with a missed field goal and the same outcome as the last time these teams met.

Newton led Carolina within range of the winning score, but Graham Gano's miss, wide left from 50 yards, gave Denver a win in the Super Bowl rematch, 21-20.

After an opening half in which he debuted a new touchdown dance and looked to have set aside all the bad memories from last year's Super Bowl, Newton met, head-first, with Von Miller and a defense that has now made him look like something less than an MVP in Carolina's last two meaningful games.

Newton ran for a touchdown and threw for another, but passed for only 16 more yards than Broncos newcomer Trevor Siemian.

He was hammered throughout this game.

Cam Newton throws a pass against Denver on Thursday night.

Two of the hits were of the head-to-head variety, and neither drew any penalty yardage. The first came from - who else? - Miller, who met him facemask-to-facemask early in the third quarter while DeMarcus Ware was dragging him down. The hit left Newton doubled over in pain on the sideline. Newton didn't miss a play, but after leading the Panthers to a 17-7 lead in the first half, he produced only a field goal after the collision.

The second hit came from Broncos safety Darian Stewart with 36 seconds left. It drew a flag and would've easily moved the Panthers into field goal range with a few plays left. But because Newton threw the ball away before the hit, he got called for intentional grounding and Carolina didn't get a yard.

Rivera not wanting to comment on the headshots until he sees replays. 'Refs have a tough job.'

Newton still delivered. He finished 18 for 33 with one touchdown running and another passing and moved the Panthers within field goal range twice in the fourth quarter. His 69.5 passer rating was 14 points higher than in the Super Bowl. For a while, at least, this game had the makings of fun.

One highlight: After his 2-yard run in the second quarter gave Newton the most rushing TDs (44) for a QB in NFL history, he stared down the southwest corner of the Broncos stadium and did a version of the hand jive before placing those hands on his hips then fake-tearing apart the center of his jersey, as if to reveal a big "S'' on his chest.

Later, Twitter went crazy with vines and video of Newton flossing on the sideline. His mother would be proud.

Newton, now 27 and a dad - his son, Chosen, was born Christmas Eve - shouldn't face too many questions about his toughness the way he did after the Super Bowl when he didn't dive into a pile to go after a loose ball. He got ripped for wearing a hoodie into the postgame press conference that night, answering the questions in barely audible form, then leaving early.

He hasn't delved too deeply into what regrets he had, if any, from that Super Bowl experience, preferring through most of the offseason to talk about one week at a time and moving forward.

Maybe the most telling thing about him was a Gatorade commercial that debuted this week. "The guy is a terrible loser," says an "analyst," while voicing over footage from Newton walking out of his Super Bowl interview. Later in the ad, Newton is holding his son, then getting ready for the rematch with the Broncos.

Message: He clearly wasn't afraid to confront his past.

Problem on Thursday was, it confronted him - in the form of a Broncos defense that looked every bit as savage as the one he faced seven months ago.