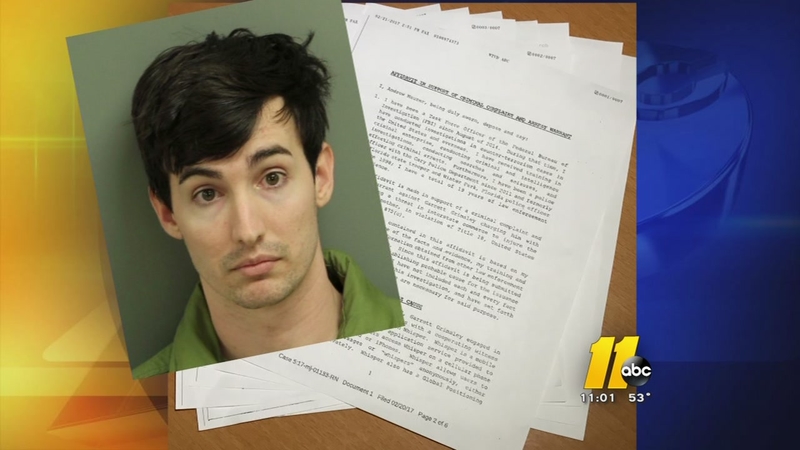 CARY, North Carolina (WTVD) -- Residents in Cary's Weston Lakeside Apartments complex are finding out one of their neighbors is charged after authorities said he posted an online threat against non-Muslims.

They were also shocked to find out that police said they found hundreds of rounds of ammunition in their neighbor's apartment, along with an assault rifle.

The United States Attorney's Office for the Eastern District of North Carolina said on Tuesday that a criminal complaint was filed against Garrett Grimsley, 27.

Grimsley, of the 3100 block of Lakeside View Court, has been charged with transmitting a threat in interstate commerce to injure the person of another.

According to an affidavit, on Sunday, February 19, Grimsley posted an online message that said, "don't go to Cary tomorrow." This was posted on a messaging app called Whisper. A cooperating witness for the authorities was also on the app and pressed Grimsley, who was writing under the username, "Spark_Pure," for more information.

In a private message, authorities said Grimsley stated, "Salam, some of you are alright, don't go to Cary tomorrow." In the background of the post was a picture of a bearded, middle-aged man wearing camouflage pants and holding a red flag with a black star in the middle.

When the witness asked what was happening in Cary, authorities said Grimsley responded by using a derogatory word for non-Muslims and said that for too long, "they have spit in our faces and trampled our rights."

He went on to say that it could not continue, "Say your dua (prayers), sleep and watch the news tomorrow. It will only be the beginning."

Then he said he would be deleting his Whisper account. However, Whisper was able to pinpoint the location of "Spark_Pure" and helped send police to the Weston Lakeside Apartments.

The affidavit details that as authorities were arriving, Grimsley was messaging someone on Facebook about his posts on Whisper. Police said the two were writing that they were sure Grimsley would get "raided" by law enforcement.

A search of Grimsley's apartment by the FBI, SBI, and the Cary Police Department revealed an AK-47 assault rifle with a collapsible stock, four 30-round magazines, and approximately 340 rounds of 7.62 millimeter ammunition.

If convicted, Grimsley faces five years in prison and a $250,000 fine.

The Islamic Association of Raleigh told ABC11 that "IAR always condemns any sort of violence and all kind of terrorist actions committed by anyone regardless of his faith or background. The action of this Cary man if true is no exception is condemned and should be punished in accordance with the law of the land."