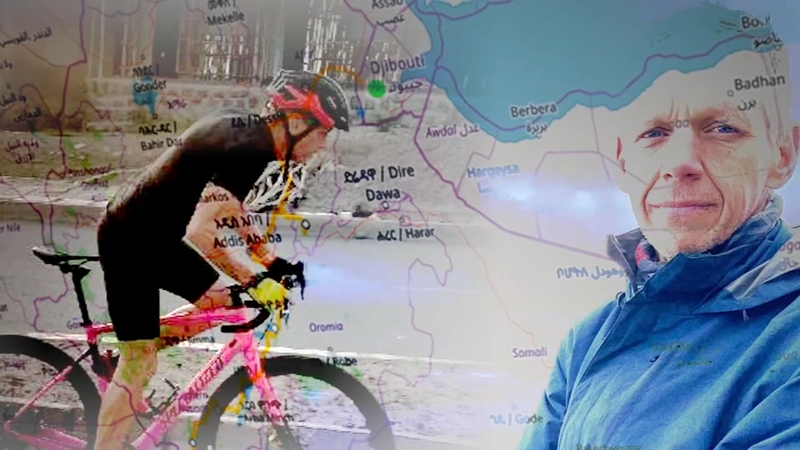 RALEIGH, N.C. (WTVD) -- Triangle ultra-endurance athlete Charlie Engle is preparing to embark on a global adventure that will take him from the lowest to the highest points on all seven continents.

"I wanted to find something new and challenging that is really going to push me to my very limit," Engle told ABC11.

Engle calls his two-year adventure 5.8 -- the number of vertical miles between the lowest point on earth and the highest.

He conceived the idea while running 4,600 miles across the Sahara Desert in 2007, an adventure made famous by a Matt Damon documentary.

He also considers 5.8 a parallel for life.

"It's my view that every single person really has this lifelong roller-coaster of highs and lows," said Engle. "We all go through this."

Engle's low point came during a battle with addiction to drugs and alcohol that began as a student at UNC-Chapel Hill.

"I had been on a binge for six days and it was in that moment, after not sleeping for six days, that I actually had the clearest thought ever," said Engle. "Nobody is coming to save me. If I don't save myself, I don't have a chance."

Engle put on running shoes the next day and began a nearly three-decade-long desire to push himself to accomplish athletic endeavors no one else has ever tackled.

"I think I wanted to pound the addict out of me, like that guy was trying to kill me, so I wanted to get rid of it," said Engle.

In August, Engle celebrated 27 years of sobriety by running for 27 straight hours around the Healing Transitions campus in Raleigh.

Engle volunteers his time at the addiction recovery center by sharing his success story with men who are beginning their recovery.

He also travels the world as a motivational speaker and focuses on helping people improve their mental well-being by looking forward in their lives, not backward.

"Without dwelling on diets and in trauma and on relationship issues and 'I hate my job', and all those things that might've gotten a person to this place where they're unhappy and unhealthy, focus forward on everything and just simply start today," said Engle.

Engle believes that path forward has to include exercise.

He believes a daily walk outside with a good friend or loved one is a good beginning.

"The things you end up talking about outside are way different than the things you talk about sitting on the sofa or drinking a beer," said Engle. "They just are more raw and more real, and that's the kind of talk people need in order to move forward in their life."

Engle's path forward involves the biggest challenge of his life.

In October, he began his 5.8 adventure in Africa by diving Lake Assal, biking one-thousand miles and climbing Mount Kilimanjaro.

The final leg of the adventure series will come in 2021 when Engle covers a path from Israel to Nepal.

"I devised this plan where I would swim into the Dead Sea and do a free dive to the lowest point I could reach, and come back up, swim to shore and run 2,000 miles across the Arabian desert to the tip of Oman, and then in Oman I would get into a kayak and paddle 1,000 miles across the Indian Ocean to Mumbai, India," Engle said. "In Mumbai, I would mountain bike all the way across to the base of Everest and then I would climb, it's only like three miles from there, it just happens to be straight up."

Before the finale, Engle plans to tackle five continents in 2020.

"Part of my goal is to get to that place where I absolutely can't go any farther and then find a way to get past it because that's what matters, that's the time that defines the success of what I'm doing," said Engle.