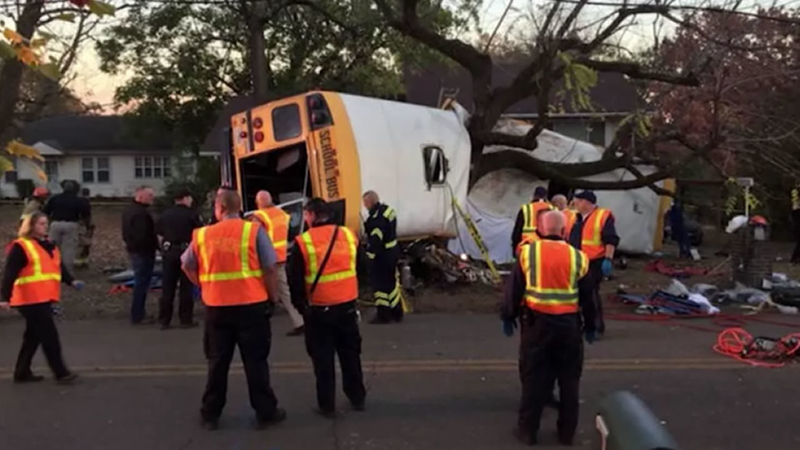 CHATTANOOGA, Tennessee -- A school bus driver was behind bars Tuesday after a crash killed five youngsters and plunged Chattanooga into mourning over what the mayor called the "most unnatural thing in the world" - a parent losing a child.

Police said Johnthony Walker, 24, was speeding along a narrow, winding road Monday afternoon with 35 elementary school students aboard when he wrapped the bus around a tree. Walker was arrested and charged with five counts of vehicular homicide.

Reeling from the tragedy, Chattanoogans lined up to donate blood, created a memorial of flowers and stuffed toys at the crash scene.

At an evening prayer vigil, a local church overflowed and a gospel choir cried out in booming song. Preachers and officials spoke of grief, strength and faith.

Children the same age as those who died were talking, getting antsy and playing a little in the capacity-filled lobby. Reality intruded, though, as an usher walked a tearful woman through the crowd. "This woman needs a seat. She lost her daughter," he said.

Parents who send their children off to school every day struggled to come to grips with the shock and break the news to their loved ones.

"It's real tough, said Dujuan Butchee, whose daughters, Jamya and Janesa, are eighth-graders who used to go to the same school as the youngsters killed in the wreck. "It's tough on my kids because they know some of the victims as well."

Butchee said it wasn't the first time he heard about a bus speeding: "I think it should wake up more bus drivers to be more cautious because you're dealing with a lot of kids' lives."

Police said Walker was driving well over the posted 30 mph limit when he lost control of the bus, which was not equipped with seat belts. He was jailed on $107,500 bail for a court appearance Nov. 29 on charges that included reckless driving and reckless endangerment. It was not immediately known whether he had a lawyer.

Dr. Darvey Koller, a pediatric emergency room physician at Children's Hospital at Erlanger, said identifying the students after the crash was a lengthy process in some cases.

"Many of them were scared or too dazed to talk to us," Koller said at a news conference Tuesday. "Because of their young age, many of them were unable to spell their names, did not know their birthdays or even their parents' names - several said 'Momma' when they were asked what their name was."

Hospital staff photographed each child and showed the images to teachers to figure out identities, he said.

Three of the children killed were in fourth grade, one was in first grade and another in kindergarten, said Kirk Kelly, interim superintendent of Hamilton County schools. Their families were notified, but their names were not released. All the children aboard went to Woodmore Elementary School.

"The most unnatural thing in the world is for a parent to mourn the loss of a child," Mayor Andy Berke said. "There are no words that can bring comfort to a mother or a father. So today, the city is praying for these families."

The National Transportation Safety Board sent a team to investigate, and police obtained a warrant to remove the bus' black box, which contains data on the vehicle's movements.

As the investigation got underway, NTSB chairman Christopher Hart said the agency will look at such factors as the driver's actions, the condition of the bus, and whether seat belts - something the NTSB has been pushing for - would have made a difference.

Craig Harris, a parent of two children who were on the bus, told ABC's "Good Morning America" that the bus driver sometimes drove too fast.

"There has been times where I've seen him going a little faster than he probably should be going," Harris said. He said his daughter and stepson were in shock and pain after the crash.

Walker had an accident involving property damage in September, and his license was suspended for about a month in 2014 for failure to show proof of insurance, according to state commercial driver records. He appeared to have no criminal record in Tennessee, authorities said.

Hamilton County School District spokeswoman Amy Kutcher declined to say whether the district had received any complaints involving Walker, who was employed by an outside bus contractor, Durham School Services. She referred all questions about his performance and that of other Durham drivers to the company.

"Legally, there is no way that we could discipline someone who is not our employee," Kutcher said. "We've got 192 Durham bus drivers. Obviously, this is a bad one."

Durham CEO David A. Duke issued a statement on Twitter saying the company was "devastated" by the accident and working with police and school officials to investigate. Company officials did not return calls and emails seeking comment.

Durham has had other drivers who have run into legal trouble in the school district that includes Chattanooga, according to news reports. Last year, one driver pleaded guilty to aggravated statutory rape, and another was arrested on child-porn possession charges. Both were fired.

Durham, based in Warrenville, Illinois, operates about 13,700 vehicles around the U.S. and has nearly as many drivers, according to the Federal Motor Carrier Safety Administration. It had a "satisfactory" safety rating from the agency in July 2015.

The company has had 346 crashes over two years, including three resulting in deaths and 142 with injuries, federal figures show. During that period, it had 53 incidents involving unsafe driving violations.

On Tuesday morning, the heap of mangled metal that used to be a bus was loaded on a trailer and taken away, and counselors were on hand for the students and staff as classes resumed at the school. The Rev. Tavner Smith and a dozen staffers from the Venue Church went to offer support.

"It's devastating," Smith said. "You send your kids to school and think you're going to see them that evening."