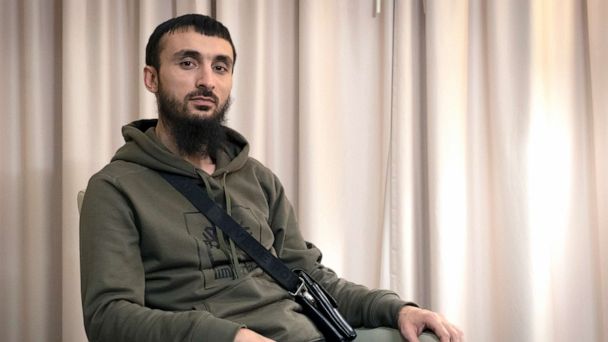 A prominent Chechen blogger and critic of the region's leader Ramzan Kadyrov has survived a suspected assassination attempt after fighting off a man he said attacked him in his apartment in Poland.

Tumso Abdurakhmanov posted a video on Wednesday night showing himself looking shaken and standing over a man on the floor of the apartment lying in a pool of blood. Abdurakhmanov, who is breathing hard, asks the man, "Who sent you?" and then shows a hammer which he says the man tried to kill him with.

The man replies he came "from Moscow" and that "they have my mother," possibly implying he may have been compelled to undertake the attack.

The Sweden-based Chechen rights group, Vayfond, described the incident in a statement Wednesday as an "assassination attempt." It said that the man had broken into the apartment intending to bludgeon Abdurakhmanov while he slept, but that he had woken up and fought off the attacker before calling the police.

Abdurakhmanov's brother has told Kavkazskii Uzel, a website focused on the North Caucasus, that Abdurakhmanov and the attacker have both been hospitalized. Abdurakhmanov suffered only minor injuries and was under police guard, according to the outlet.

The suspected attack is the latest in a string of recent attacks targeting Chechen opponents of Kadyrov living in exile in Europe.

At the beginning of this month, another Chechen blogger, Imran Aliev, was found stabbed to death in a hotel room in the northern French city, Lille. In August, a former Chechen rebel commander, Zelimkhan Khangoshvili was shot dead in a park in Berlin by a gunman in an attack German authorities have linked to the Russian and Chechnya security services.

Chechen exiles believe the attacks are being carried out on the orders of Kadyrov and his circle, who have long been accused of brutal repression in Chechnya, a predominantly Muslim republic in southern Russia. Kadyrov, who was appointed by Russian President Vladimir Putin in 2007, has ruled the republic with an iron fist and his security forces are accused of using torture and extrajudicial killings against opponents. Recently, Kadyrov's forces have been accused of conducting purges against LGBT people in Chechnya.

Abdurakhmanov is perhaps Kadyrov's most prominent critic. He runs a YouTube channel with 250,000 subscribers, where he criticizes the violence and alleged corruption of Kadyrov and his officials.

Abdurakhmanov fled Chechnya in 2015 after a conflict with a senior Chechen official and has sought asylum in Poland. The country rejected his request in 2018, a decision that was criticized by Amnesty International that said he faced a real threat of torture if he returned to Chechnya.

Last March, a member of Chechnya's parliament and one of Kadyrov's top lieutenants, Magomed Daudov, publicly declared a "blood feud" against Abdurakhmanov, accusing him of being a "traitor" to his people.

In a now deleted live broadcast on Instagram, Daudov, who is known by the nom de guerre 'Lord,' addressed Abdurakhmanov: "From now on, when you go to bed, make sure that you lock the door with a key. When you go outside, be vigilant. If you get a kick in the back, know that it's no accident."

At the time, Abdurakhmanov told The Associated Press that he took Daudov's threats seriously.

"I take Daudov's words very seriously," Abdurakhmanov told the AP. "He is a person who has the power to follow through on his threats."

Putin's spokesman Dmitry Peskov on Thursday said he was "not inclined" to link the assault on Abdurakhmanov with his criticism of Kadyrov, saying Russian citizens can be attacked for a variety of reasons. "It's grounds for sympathy, but I don't think this is a significant event for the Russian agenda," Peskov said during his daily briefing, according to the state news agency Tass.

Chechens living in exile have expressed fears they could be targeted by forces loyal to Kadyrov, even in Europe. In 2019, several gay men who had fled Chechnya amid the roundups of LGBT people, told ABC News they worried they could be attacked if they were identified and some have said they received threats via messengers.

Several Chechens have been shot dead in Istanbul over the last decade in killings that Turkish authorities suspect were linked to the Russian security services. In 2009, Kadyrov's former bodyguard was killed by a gunman in Vienna after publicly alleging he had been personally tortured by Kadyrov.

Kadyrov's circle has also been linked to the murder of Boris Nemtsov, the Russian opposition leader who was gunned down in 2015 close to the Kremlin.

A Moscow court in 2017 convicted five Chechen men of the murder, including a former officer belonging to an elite Chechen paramilitary unit. Nemtsov's family have accused the authorities of a deliberate cover up after investigators were blocked from questioning an influential Chechen official close to Kadyrov, who has been accused of playing a role in ordering the assassination. This weekend marks the five year anniversary of Nemtsov's death.
Report a correction or typo
Related topics:
abc newsnational
Copyright © 2020 ABC News Internet Ventures.
More Videos
From CNN Newsource affiliates
TOP STORIES