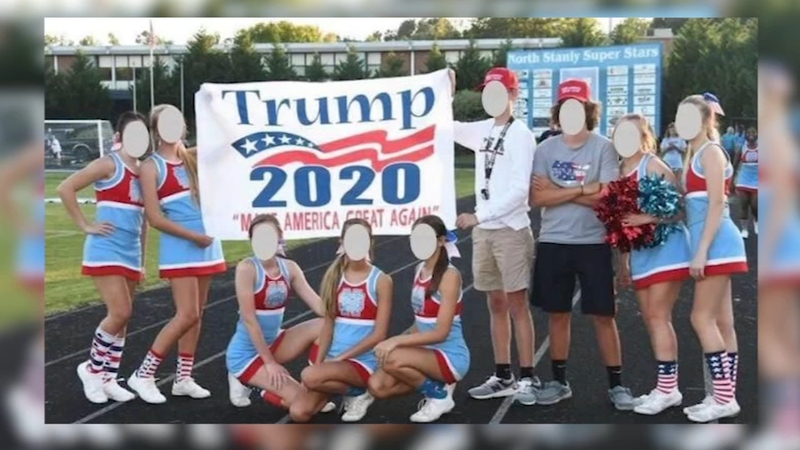 EMBED <>More Videos
STANLY COUNTY, N.C. (WTVD) -- U.S. Rep. Richard Hudson (NC-08), is now weighing in on the decision to place a group of North Carolina high school cheerleaders on probation after they were pictured with a President Trump 2020 re-election sign at a football game.

The North Stanly High School cheerleaders posed in front of a "Trump 2020: Make America Great Again" banner before a football game in August.

The photo circulated on Facebook and caught the attention of administrators.

Hudson, whose district includes Stanly County, sent a letter to the commissioner of the North Carolina High School Athletic Association, saying he was "appalled" at NCHAA's decision to place the cheerleaders on probation for the remainder of the season.

In a phone interview with ABC11 Tuesday, Hudson said the students deserved to have someone stand up for them and their rights.

Hudson said the punishment, which he referred to in his letter as "unfair," urging the NCHSAA to reconsider, is a symptom of a larger problem.

"Every time I talk to young people I encourage them to be involved politically no matter what their beliefs are," Hudson told ABC11. "I do think there's a larger problem in our society with just the lack of political discourse just the fact that people can't- -- with different political views -- can't seem to have a rational conversation with each other. I think that's a real shame."