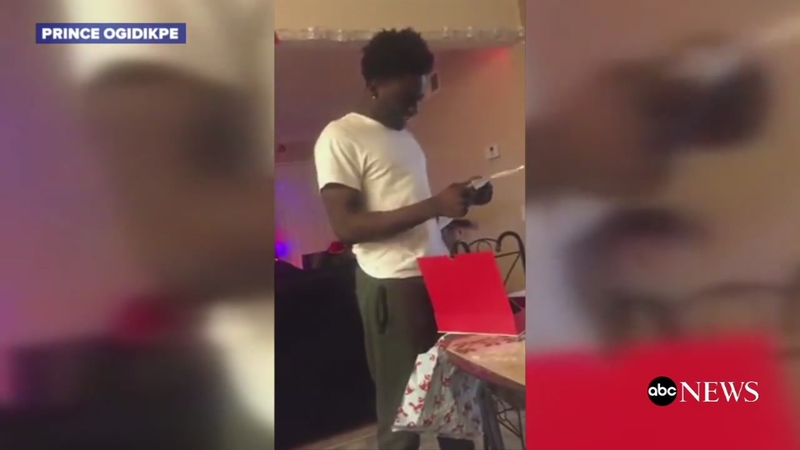 SAN BERNADINO, Calif. -- A teen from Nigeria got a big surprise from his mother on Christmas Day - a letter confirming his U.S citizenship.

Prince Ogidikpe, 19, moved to the U.S. from Bayelsa State, Nigeria in 2010. He has been living with his mother in California, who became a citizen herself in 2006.

He said that his mother usually gives him gag gifts for Christmas, so when she gave him a box that appeared to advertise a diet plan, he was both amused and confused. He thought it was just another prank.

But in a video, that has since gone viral, you see Ogidikpe unwrapping the gift and asking, "Man, what's this?"

"There was a random letter in it that was already opened," he told ABC News. "Then when I read the top of it, I said, 'Whoa! This is not a joke!' And the excitement took over."

Ogidikpe is seen in the video, which has been viewed more than 70,000 times on Facebook, jumping up and down after he realized that he's been invited to obtain a certificate of citizenship.

Ogidikpe had been waiting quite a while for that letter. Due to financial constraints and missteps on his citizenship application, the process has taken six years.

"Time and time again, there was always something," Ogidikpe told ABC News. "After the last time we applied for it, I stopped thinking about it. That thought just left my head."

Ogidikpe said he was happy that it happened in the final days of President Barack Obama's administration. He considers Obama one of his heroes.

"He's given a lot of people hope ... that we can really do anything we set our minds to do. And just to have somebody who looks like you in that position as the leader of the free world, it's just amazing to me," Ogidikpe said.

Ogidikpe said after he graduates college, he plans to go to medical school or obtain his Ph.D.

"I'm now part of what is called the greatest nation on Earth," Ogidikpe gushed. "It means a lot to me to finally say I am American."