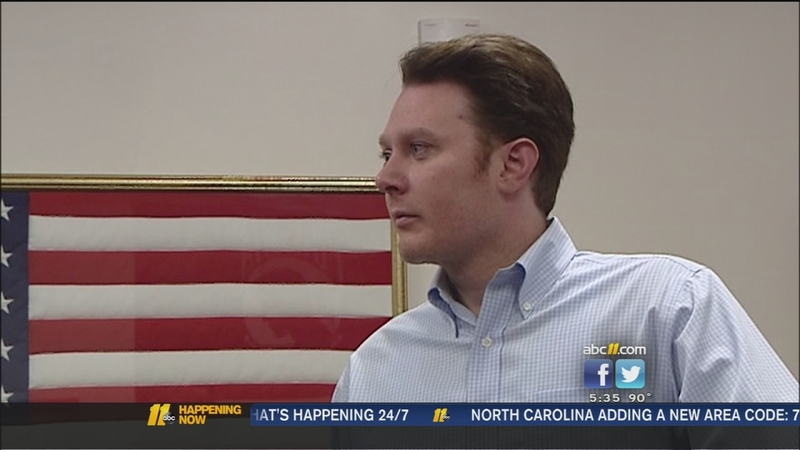 FAYETTEVILLE (WTVD) -- In a statewide tour of community colleges, Clay Aiken spent Thursday morning at Fayetteville Technical Community College, focusing much of the time in the institution's All-American Veterans Center.

Aiken, a Democrat, is challenging Republican incumbent Renee Ellmers for the 2nd Congressional District seat. Much of his summer has included military-focused campaign stops in the Sandhills, including a recent roundtable discussion in Fayetteville and a defense trade show at FTCC.

"My brother was a Marine and he spent two tours in Iraq, came back, and struggled in some ways to find a job," Aiken said. "(He) struggled in some ways to make sure what he'd been trained to do in the Marines translated into credit in college and Fayetteville Tech is doing a lot of the work for soldiers coming out of Fort Bragg for them, and making sure they can make those transitions."

FTCC has enrolled at least 3,000 veterans since 2012, posting the highest veteran enrollment among state colleges and universities. Earlier this summer, it opened the All-American Veterans Center, which focuses on the transition from active duty service to the civilian workforce through counseling, coaching and job placement. It also certifies military experience for college credit.

Alongside FTCC President Dr. J. Larry Keen, and the Center's veterans services coordinator, Matt Thewes, Aiken asked about mental health referrals, and publicity of veteran resources. He said language barriers between civilians and service members should be broken to ensure smoother transitions into the workforce. Aiken also noted the need to educate military members about their full scope of benefits coming out of the service.

"When you're done with active duty the DOD sort of hands you off to the VA and there are a lot of people who fall through cracks there," he said. "I think the federal government has an obligation. I think all of us have an obligation to do a better job of supporting people."

Aiken commended the center's operations, noting it's a model for what he believes should be duplicated in institutions across the state and country with large military communities.