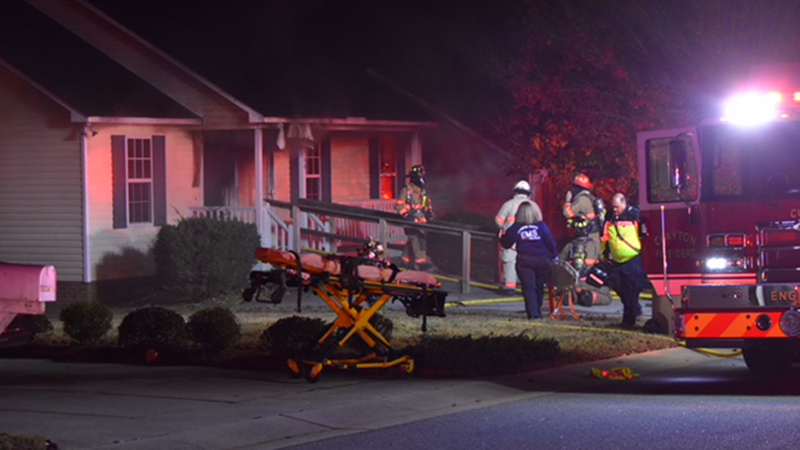 CLAYTON (WTVD) -- A disabled Clayton man is recovering from smoke inhalation after firefighters pulled him from his burning home Monday night.

It happened just before midnight at a one-story home in the 1100 block of Grovewood Drive off Barber Mill Road.

The man's adult son told ABC11 he was home with his dad and both were asleep at the time.

He called 911 after the fire alarm and his dog woke him up.

When firefighters arrived, the son was outside flagging down the fire trucks. He said he tried to get his father out but couldn't.

The Clayton Fire Marshall believes the fire started in the front living room of the house under a bookcase with some electronics. Investigators are still working to make a final determination.

"With that amount of smoke your first thoughts are that this can't be survivable," said Jason Thompson, Clayton town councilman.

Thompson, who is a career paramedic, also regularly photographs fire scenes as a hobby. He was off duty Monday night but responded to the scene with his camera when he heard the fire call come across the scanner.

After taking only a few pictures, the EMS supervisor asked him to step in and help.

Firefighters said smoke had filled the rooms and hallways from the ceiling to the floor by the time they got inside.

They said they found the man in his bedroom, unable to walk or speak.

"The gentleman appeared to be ... at first I thought lifeless," Thompson said of the man firefighters pulled out of the burning home. "They brought him over to the awaiting stretcher, and when they put him down he looked at me and I thought, 'oh my gosh this guy is alive.'"

Thompson, who's seen many fires throughout his decades of service, said it was a well-equipped team effort that saved the man's life.

"This really reinforces the fact that we cannot cut corners with public safety, that we need to equip them with the funds and with the training and with the staffing that they need to do their jobs," he said. "I think if any one of those components were missing then the outcome could have been different."

The man and his son were taken to UNC Burn Center in Chapel Hill after suffering smoke inhalation. Neither were burned by flames.

Authorities said the family's house is unlivable and the father, son, and mother - who was not home at the time of the fire - will need to find a temporary place to live while repairs are being made.
Report a correction or typo
Related topics:
claytonclayton firefirefirefighters
Copyright © 2021 WTVD-TV. All Rights Reserved.
TOP STORIES
New legislation would require women to sign up for potential draft
Should vaccinated people mask up with COVID-19 cases rising?
Bumble match turns in Jan. 6 suspect who allegedly whipped police
Amazon hires investigators to probe work culture
Cary 17-year-old advances to semifinal in women's 100-meter butterfly
Walnut Creek welcomes fans back for first live event since 2019
Show More
2 killed in double shooting on I-85S entrance ramp near Duke St
WEATHER: A warm weekend with more rain chances Monday and Tuesday
Black car buyer's experience marred by dealer's 'racist' Facebook post
2 Durham officers who died from COVID honored in 'End of Watch Ride'
Company wrongly charged woman monthly since 2019
More TOP STORIES News