ATLANTA -- Another suspicious package addressed to CNN has been intercepted, the network reports. The latest package was screened at an Atlanta post office, CNN says.

There is no imminent danger to CNN Center and no injuries have been reported, the network reports. 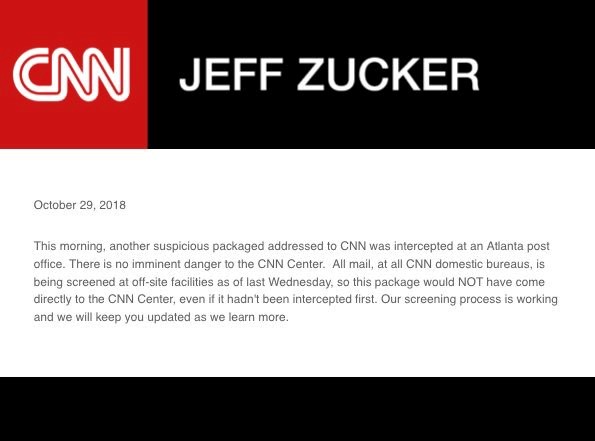 On Friday, a suspicious package containing an explosive device was discovered at a Burlingame postal facility on Rollins Road. The postal facility was evacuated and authorities transported the device to the police gun range near San Francisco International Airport where it was rendered safe. No one was hurt. Police believe it was sent by suspected mail bomber Cesar Sayoc.

The same dramatic scene also played out in Sacramento on Friday, after a postal worker discovered a suspicious package addressed to U.S. Sen. Kamala Harris, D-Calif. The post office was evacuated and neighbors were told to shelter in place.

The FBI confirmed the device was similar to a dozen others sent to prominent Democrats and CNN.

"Thankfully nobody was hurt and that's my first priority," Sen. Harris said. "There are powerful forces...that have been sowing hate and division among us."