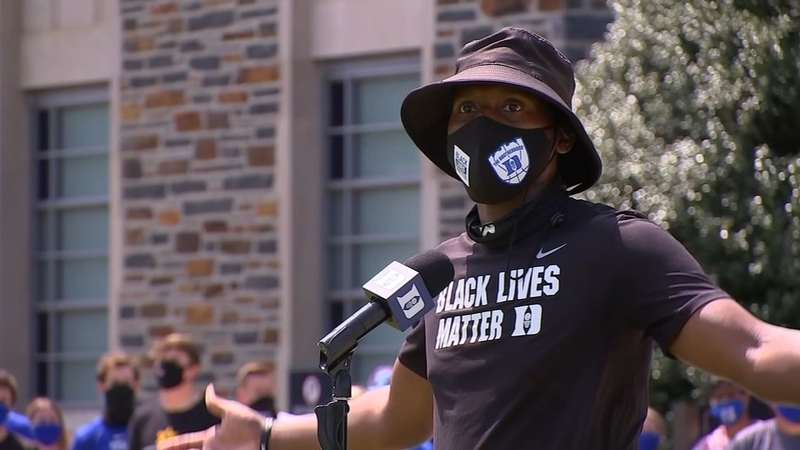 DURHAM, N.C. (WTVD) -- Thursday afternoon, in the famous Krzyzewskiville courtyard, Duke athletics came to a temporary halt. Athletes from every team on campus gathered to discuss the ongoing issues of systematic racism and injustice that continue to plague the country.

It lasted for roughly 45 minutes, raw emotions on display. Pain, hurt and some hope mixed in as well.

Duke professor Mark Anthony Neal was one of the speakers. Among his words, a challenge to the athletes in attendance.

It came together in under 24 hours, the brainchild of Duke assistant basketball coach Nolan Smith.

"Systemic racism and social injustice is here. In order to solve a problem, you have to acknowledge it," Krzyzewski said. "Today is for all of us to acknowledge this problem, to share our feelings."

Duke women's basketball coach Kara Lawson couldn't even get words out initially, too overcome with emotion until her team came to her side.

"Every day when you wake up, you feel anxious of every moment knowing that on your drive to school or your drive to work or going to a restaurant, sitting in your house, hanging out with your friends at a park - that could be your last moment on earth," Lawson said.

Duke WBB coach Kara Lawson gets up to speak. Immediately emotional talking about the experience of being black in America. Her team took the stage in support. pic.twitter.com/3FAm8KfKj7

Football coach David Cutcliffe and his team were also present.

Duke freshman basketball player Henry Coleman reading from something he wrote trying to capture the hurt he’s feeling. Was joined by his teammates pic.twitter.com/WvfdaOBwAk

Smith closed the event with a call for action.

"This is not a moment. This is a movement," he said.

Nolan Smith to close things out: “This is not a moment. It’s a movement.” pic.twitter.com/DpQ4vBCaa4

He urged the coaches in attendance to check on their players. To ask about the pain they are most certainly feeling.

At the conclusion of Thursday's rally, Duke's basketball team members headed immediately inside Cameron Indoor Stadium to register to vote. They were followed by student-athletes from many of the other teams as well.

"We need to have a display on campus where every student on campus is registered and will vote, and then you vote with your heart," Krzyzewski said. "I'm not telling you who to vote for, but if we don't get the proper leadership at every level in our country, this is not going to go away. We can look at and see the police brutality, but what you don't see are the amount of educational opportunities that are deprived young black kids, health and welfare opportunities, economic opportunities. These things can only be changed with proper leadership and organization. And so the first step in that is for all of us to vote."

He said it was the current generation that was going to help America live up to its ideals and values.

"Your generation is the generation that's going to do it. I grew up a long time ago in the 60s, I thought it was headed in the right direction. Damn, I was wrong. I want to be right. I want to be on your team. I want this systemic racism and social injustice to be defeated," Krzyzewski said.

The event at Duke University came a day after NBA players, some of whom Coach K had coach either in college or with Team USA, refused to play. The players forced the NBA to postpone the playoffs in light of the shooting of Jacob Blake.

Blake, a North Carolina native, was shot in the back seven times by Kenosha police officer Rusten Sheskey. Days later, 17-year-old Kyle Rittenhouse traveled from Illinois into Wisconsin with a firearm. He ended up shooting three protesters, two of whom died from their injuries.