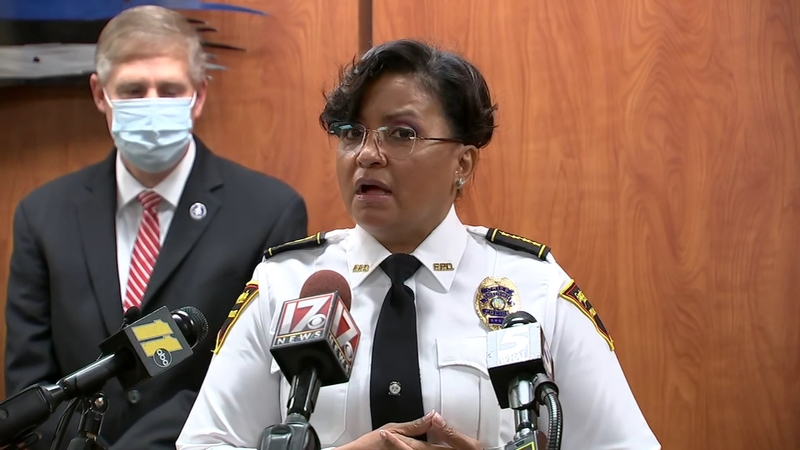 FAYETTEVILLE, N.C. (WTVD) -- A man was arrested Monday on charges related to a brutal kidnapping and rape that happened in 1992.

Fayetteville Police Department said during a news conference the case remains open, and the arrested suspect is one of three people wanted in the case.

One night in 1992, the victim was working her job cleaning offices at Lafayette Memorial Park. While toting some equipment back to her car, she was attacked and knocked unconscious.

A person was arrested Monday on charges related to a brutal kidnapping and rape that happened in 1992.

She woke up in the trunk of a vehicle. The three suspects took her to a wooded area where they raped her, beat her, and left her for dead.

Investigators at the time said the victim was beaten worse than anyone they had ever seen. The severity of the case is why it has remained top of mind for Fayetteville investigators.

It was actually the first cold case opened by a newly created cold-case unit in 2016. However, the case remained unsolved.

Proctor was arrested in 2013 for assault on a female.

Police said during that arrest a DNA sample was not obtained from the suspect. If it had been, the case would've been solved then.

Police said Proctor has lived in Fayetteville this entire time. He is now in the Cumberland County Detention Center and is scheduled for his first court appearance Tuesday.

Fayetteville Police Chief Gina Hawkins said if Proctor refused to cooperate with investigators, the department would be asking for the public's help identifying the other two people involved in the crime.

All of the investigators in this case said the victim was relentless in advocating for herself and others.

"She has been a shining beacon for sexual assault victims across the country," Petty said.

"She stayed with this case and this issue, in a very selfless manner, because it looked like for many, many years that her case would not be solved. Yet she continued to be dedicated to supporting others that this had happened to, in hopes that their cases may be solved with the realization that hers may never be solved."
Report a correction or typo
Related topics:
fayettevillerapesex assaultsexual assaultcold case
Copyright © 2022 WTVD-TV. All Rights Reserved.
TOP STORIES
Cary store owner says thieves stole 300 gallons of gas
Mother, son found dead outside Hope Mills apartments
Wake Forest Montford Point Marine celebrates 100th birthday
Wake County reports highest rate of COVID-19 cases per capita in NC
With primaries finished, candidates turn focus to November
Motorcyclist killed in two-vehicle crash in Fayetteville
Biden invokes Defense Production Act for formula shortage
Show More
NC woman wins $2M on lottery scratch-off on Friday the 13th
Gas prices continue to hit new highs in NC
Target's stock plunges amid disappointing first quarter results
Wake Co. Board of Education approves meal price increase for 2022-23
1st monkeypox case in US this year reported in Massachusetts
More TOP STORIES News