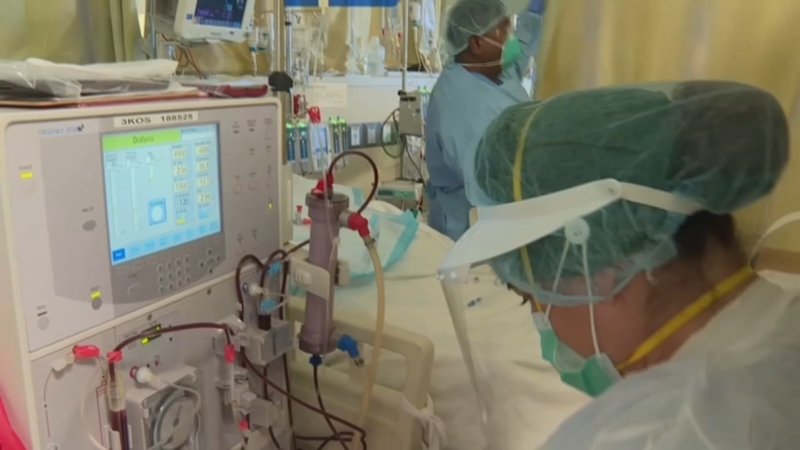 "I'm going to lose the script, and I'm going to reflect on the recurring feeling I have of impending doom. We have so much to look forward to, so much promise and potential of where we are, and so much reason for hope. But right now, I'm scared," CDC Director Dr. Rochelle Walensky said Monday.

The seven-day national average of new cases hit a three-week high during the weekend, with North Carolina seeing a similar trend; on Saturday, the state reported 2,250 new cases, its highest-single-day increase since the first week of March.

Though North Carolina continues to have ample hospital and ICU bed capacity, as well as available ventilators, doctors hope they won't be needed.

"The decrease that we had seen over the last couple of months has leveled out and starting to rise again, so that signal is real, and it's been predicted by epidemiologists. We saw it in late March, and we're seeing it bear out. We've had three surges previously, and they've had different peaks. The last one was the worst, with the highest number of cases in the winter. It's hard to say where the current one will level out or where it will stop, but we do appear to be starting with another uptick in cases now," said Dr. Thomas Holland, an associate professor of infectious diseases at Duke School of Medicine.

"We're all tired of this and tired of the restrictions and staying home. And we all want to see family and go out and do the things we've been wanting to do for a year now. Some of the high-risk things are going to be traveling and mixing with people who are not in the bubble that you've been in for the last year, so seeing family or friends and traveling to do that is going to increase the risk of spread. We've been in a race to get as much of the population vaccinated as we can, and we're making steady progress with that, but we're still probably six weeks or so from having half the US population that's received at least one dose," Holland said.

Sunday marked the 18th straight day that more than 1 million passengers traveled through TSA checkpoints, a sign of growing momentum and enthusiasm.

Still, the metrics are forcing churches to alter their Easter services.

"Because of the pandemic, our presentation this year will be virtual. And we've been offering services, bible studies, Sunday school and Sunday worship services through social media, and we will continue that, because we are very concerned that everyone receive the vaccine," said Pastor Dumas A. Harshaw Jr. of First Baptist Church in downtown Raleigh.

Similar to Passover Seder's this past weekend, Harshaw said he believes many congregants have made adjustments to their celebrations.

"We're certainly looking forward to making sure there's a process that ensures the safety of our congregants, and not just rushing back because we can," Harshaw said.

They've limited the number of staff inside the church and worked to connect with congregants through other means.